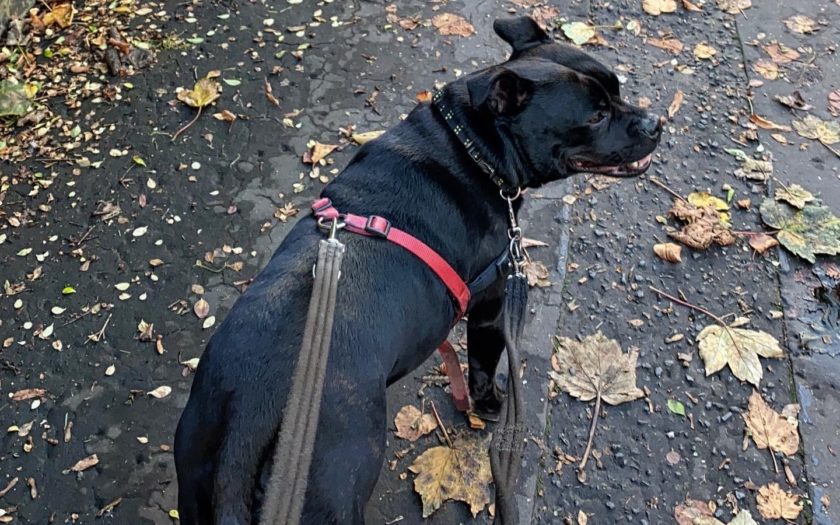 I’m sitting on the sofa watching TV. There is a small brindle dog lying next to me, gently snoring. At my feet a small black dog lies on a rug, knawing on a chew toy. He stops, stands up, and turns around to face me. He whines pathetically, his bottom lip petted. He needs out.

I slip on my shoes, pull on my jacket, check I have my keys and some poo bags, and reach for his harness and lead.

He does not like putting his harness on. Honestly you’d think it was full of spikes or something; the second you lift it off the hook, he turns and heads back to the living room only to remembers he needs out, upon which he turns round and walks back into the hall, stopping a few feet away from where I stand.

I beckon him forward. He takes one more step forward and waits.

I reach down and slide the harness over his head, click both fasteners closed, wait for him to do his usual circle around me (no idea why) and open the front door.

All the while, the snoring from the living room continues.

Dave and I step out and head for our first stop. It’s not far, he needs to pee after all, but he’s pulling on the lead. I can sympathise, we’ve all had that feeling when the cool air hits you, so I pick up my pace. After checking there is no-one around, no other dogs at least, I unclip the lead from his harness. He quickly heads off to find a spot and once he has he leans forward, head held aloft, striking a very regal pose for a most unregal activity.

Don’t worry, this is not a post about taking my dog out for a pee.

But it is about the simple joy of being outside, rain or shine, with a faithful companion.

We are lucky that we live where there are a few small parks dotted around nearby. In less than 10 mins we can be in leafy green area where Dave can be let off the lead (after checking we are mostly alone of course) to roam and wander and explore. We also have a larger park near us, big enough to host a Parkrun (5km weekend run), where I occasionally take Dave and, once he realises where we are heading he knows that a tennis ball will feature soon and, once that wonderous yellow orb has made an appearance, it’s all he cares about. I’ve yet to see him distracted for more than a few seconds when there is a tennis ball involved.

But mostly his walks are around the local neighbourhood.

He is well trained and loves loves LOVES being on a walk. He is handsome, has a glossy coat and a ready smile for passers-by and sometimes, if you are lucky, he’ll want to stop and say hello but mostly he is DOING A WALK and can be very single-minded on this so let’s be clear, unless you have treats, he may not care that you think he’s a good boy, or that he’s handsome, or a ‘wee cracker’, because he is DOING A WALK. It’s nothing personal but he ain’t stopping, he has places to go, smells to seek out and who knows, maybe a squirrel friend to make!

You get pretty good at reading the body language of other people when you are walking a dog. I know not everyone likes dogs (aka weirdos) and so if I see someone we are approaching trying to eek out every centimetre of the pavement, hugging the kerb, then I’ll make it obvious that Dave is not able to get anywhere near them. He’s also a very good boy at STOPPING and WAITING if that’s what is gonna be less hassle for everyone else.

There are several places where he gets let off to roam. These parts of the walk are the best and the worst. They are the best as it’s clear Dave loves exploring all the wonderful smells, and they are the worst because I’m constantly scanning around for any possible distractions or anything that might cause an issue – a jogger, another dog, a squirrel (!) – whilst keeping an eye on Dave as he meanders around, following his nose.

All of these places are reasonably enclosed, small parks or areas of grass, and Dave will happily roam around and follow commands if he wanders off too far. He loves to chase birds and squirrels, because he wants to be friends with them, and occasionally that can take him a little too close to a gate or road for comfort. My heart races as I holler his name in the right tone, the one that (so far!) has made him stop dead and turn round.

He really is a good boy.

It’s something I tell him often whilst we are out walking, rain or shine, as he walks on with a dogged determination to get where he is going even if that means sometimes we will both have different ideas of where that is when we get to a particular corner or a crossing, and so you may see me standing with a small black dog leaning all his weight in one direction, whilst I stand pointing in the other direction and suggesting that ‘No Dave, we are going this way’. Some days I let him win, it’s his walk as much as mine.

Dave and I will chat most of the time when we are out on a walk, and whilst it’s a pretty one way conversation – not because he’s rude or anything but he is DOING A WALK and just doesn’t have time for idle chit-chat – I always come home feeling good about myself.

Perhaps it’s because there is such a singular purpose to taking him for a walk, a focus and purity to the activity that I don’t get elsewhere. There is me and Dave and the walk. Nothing else really matters, as long as I keep him safe and he has fun then I’m happy, and somewhere along the way my own mind clears and some days I find myself taking a longer route home just to enjoy my time with him.

Considering he’s only been in my life for about a year it’s safe to say that we’ve bonded pretty well, and whilst the old adage likely holds true – you are only as good as your last walk – and I have to battle for his affections with our dog walker, I still look forward to taking him out.

It also makes me appreciate our corner of this beautiful city we live in all the more, and how many small green places it has, some hidden away in odd corners or dead ends, and on the days the sun is shining and the plants are in full bloom it is utterly glorious. Just me, the fresh air, nature all around us, a small furry black dog who sometimes turns to look at you with the biggest smile you’ve ever seen.

It’s quite simply the best therapy I’ve ever experienced.

We finally get home, and as soon as the door is unlocked and opened Sasha sprints through from the living room to greet us with her usual frantic abandon. She runs in circles, tail wagging madly as I unclip the harness and let Dave wander off to get a drink and rub up and down the sofa to get the feeling of that horrible, terrifying harness off of him.

I’ll grab a glass of water and sit down myself. Sasha will rush over and promptly sit on my lap (to make sure I don’t leave again), and I’ll sit there a while, telling her she’s a good girl whilst I rub her tummy.