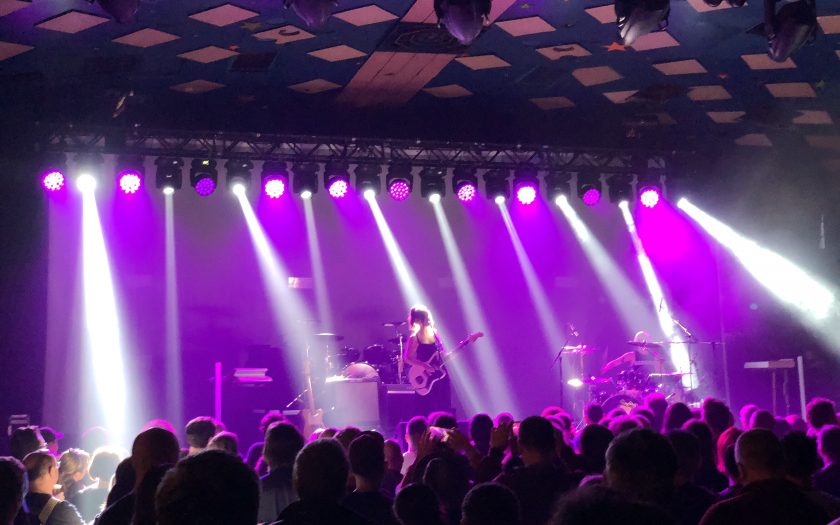 “Fry your onions in garlic!”, he shouted.

It was another evening in the Barrowlands, the ageless dance hall turned gig venue. It was late December, 1991, and I was there to see the Silencers, ably supported by the wonderful Humpff Family (wonderful in both name and in their rock/ceilidh stylings). As we were waiting for the Silencers to come on stage, the audience was starting to gear up and the noise was steadily increasing as more and more people came in and jostled their way into the crowd.

It’s the same at every gig. A guitar tech wanders on to the stage to plug in a guitar and is given a rousing cheer, every gap between playlisted ‘intermission’ songs is met with whoops and hollers. It was at this point of the evening that, in an achingly art school moment, a friend attempted his parody of the casual gig goer and their catcalling antics.

“Fry your onions in garlic!” he shouted.

Near us, heads turned in bemusement. Some people laughed and, further into the crowd ahead, a handful of people shouted back some inaudible response. Then the band came on stage and it was all lost in the maelstrom. It’s a silly moment, but it stuck in my head in that way these silly things are wont to do, and it always comes back to me whenever I go back to that dance-hall.

My memories are scattered with such things. I may barely remember who played which venue, or which song a band opened with, but I was there when a topless man, painted bright orange, went stumbling and rolling down the hill at Balloch Park, to the accompanying sounds of a didgeridoo courtesy of Hothouse Flowers. I was there when three people, one after the other, all caught their foot on the bottom step of the little raised area in the ABC, I was there when Guy Garvey pointed right at us during our favourite song.

There is something intoxicating about a good gig with a good audience. Being in the right spot helps, too far back and you are with the talkers and moaners, and alas these days there is a ‘too far forward’ as well; that is a space for young people to bounce and jump and elbow and have their own moments of glee and abandonment that I still remember from my own youth. The best gigs aren’t just about the band and the music; Faithless at the Academy on their farewell tour which was rammed full and for a change it seemed like everyone was up for a good night, Hypnotic Brass Ensemble urging the entire audience to crouch down and laughing as we all eagerly complied, the rousing rendition of We Are Sailing delivered by everyone in the Academy as we were promised the band would come back on to do an encore if we sang loud enough.

This year has, quite deliberately, featured quite a few gigs already, with many left to attend. I’ve double booked myself on more than one occasion, eschewing Superorganism for Idles, and more recently Ladytron over The Prodigy but only because the latter are playing at the single worst venue I’ve ever attended; the SEC, aka the Big Red Shed. For many years it was the largest non-stadium venue in Glasgow, hosting the likes of the Chemical Brothers, Red Hot Chili Peppers, Foo Fighters etc but, thankfully, we now have the glowing UFO-esque Hydro, and the Barrowlands has reaped the benefits as the SEC focussed more on ‘events’ than gigs. Thank fuck.

Attending more gigs than I normally do has had the bonus effect of increasing my tolerance of gig arseholes. They still frequent every gig I attend but I’m much more likely to brush off their antics as just that, antics of people who’ve had a little too much liquid refreshment, or otherwise – I’m looking at all you middle-aged pill poppers raving away at The Orb gig a few weeks back – and I’m just not letting them spoil my enjoyment of the evening. If you wanna spend the money to go to a gig and talk your way through it, that’s cool. I’ll either move, or politely ask you to shut up, but either way, ain’t no skin of my nose.

I’ve enjoyed ear-bleedingly loud gigs in the smallest venues (hello Slime City/These New South Whales/DZ Deathray at the Hug & Pint) to the completely overwhelmingly over the top visual effects offered by Roger Watters at The Hydro (if you aren’t in total awe of a 60foot high laser pyramid, including dissecting rainbow shards, then I don’t even know…). From the wonderful one woman and a guitar styling of the tiny pixie punk Stella Donnelly, to the Olympic Park stadium filling, ridiculously turned to 11, Foo Fighters. I’ve also taken chances and caught bands I’ve never heard of and been rewarded more than is fair, and making more of an effort to catch support bands has, in turn, proved to be a great decision (Gurr and the aforementioned Slime City being the stand outs, so far).

Occasionally you luck out completely and the support band just happens to be one of your favourite bands too! So it was last night when the mighty Garbage rocked up at the Barrowlands, and were ably supported by Honeyblood, a band I’ve now seen 4 times from headlining the smallest (The Hug & Pint, capacity 100) to supporting the Foo Fighters at Murrayfield (capacity 70,000) and yes, there are themes to my venue and band choices and no, I don’t care.

Fundamentally my joy of going to gigs is hearing music in a rare and raw state, away from production studios and I still love the fact that I can go into a gig with an expectation and have it utterly blown away. Gorillaz have some beautiful songs, some slow paced numbers but their live set is full of energy and M1A1 might well be one of the best opening songs ever? Add to that the joyous feeling of being as one with thousands of other people; arms raised to LCD Soundsystem, feeling the bass move through me, I could have been anywhere as I was utterly alone and lost in that moment along with a couple of thousand other strangers.

These moments of joy, of connection, of passion and positive energy feed my soul for days. The music may vary, but give me an artist who performs, who sweats, and screams, and jumps, and puts themselves into every moment on stage and I’m sold. These are the stars, the people who clearly belong on the stage, who feed off the energy we supply and give it right back in droves. They can be quiet, they can be loud, but if the connection is there then it is an entirely other thing. From the screaming Skin of Skunk Anansie who WILL make you rock out no matter how hard you try and fight it, to the dulcet coaxing and smiles of Guy Garvey, the ability to own a room and make it yours is a special talent indeed.

And it would be remiss of me not to mention the shared joy that is the cover version. Pick the right one and you have an instant massaoake; Royal Blood did it with 20th Century Boy, KT Tunstall drops a kazoo led Seven Nation Army into one of her songs (which works way better than you’d expect!), Hot Chip seamlessly blend Dancing in the Dark with All My Friends by LCD Soundsystem, and last night I left the Barrowlands still happily teary-eyed thanks to Garbage ending the night with a cover of Starman.

I rarely leave a gig without a smile on my face, a lightness in my step. Music can raise the spirit, can soothe and coddle, but a good gig is that and so much more. My soul is sated as I step out on to the street and start the journey home, already looking forward to the next one.