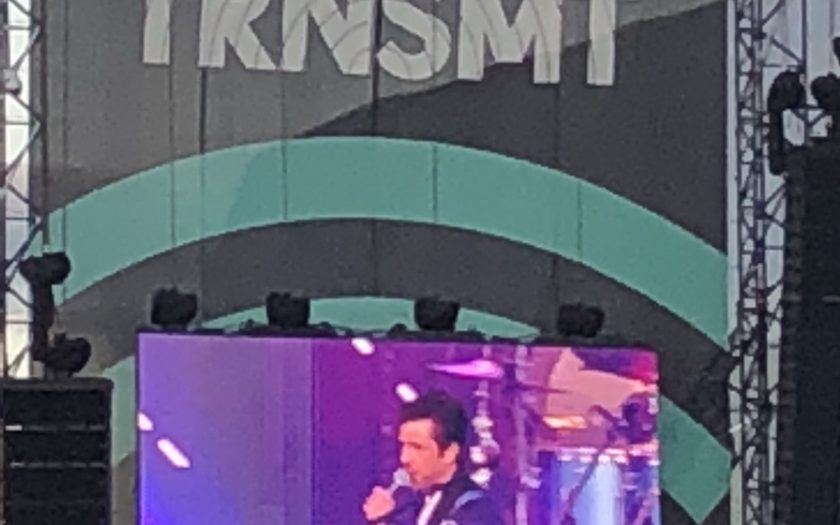 As previously mentioned, one of my first vinyl LP experiences was the Queen album Jazz and though it wasn’t my first brush with the band it remains in my memory as the gateway to 30+ years of enjoying their music. Sure, it was probably the original Greatest Hits album that I heard first but as good as all those tracks are, it was Jazz that made me realise there was a lot more to this band.

I can remember where I was when Freddie died – in the car on the way to Hospital Radio Lennox – I can remember how it impacted me and how shocking it was. By then I owned all of their albums, and VHS tapes of every documentary and live show that had been released but the realisation that I’d never see them live weighed heavy. I mean, c’mon, YOU saw them at Live Aid, you saw him rise to the occasion and own the day, right?

With that in mind, it’s fair to say that I approached Friday evening with some trepidation. Yes, it was ACTUAL Brian May and Roger Taylor but was it still Queen?

First up, hats off to Adam Lambert. I have avoided Queen ‘live’ for many years now and whilst he is no Freddie, he is quick to acknowledge that and he has a fair old set of lungs on him as well (and is arguably more camp?!). It can’t be easy singing those songs night after night knowing that everyone is still thinking of Freddie so more power to him.

And those songs! They are so deeply ingrained in my memory I kept getting caught out when Adam didn’t match how Freddie sang them but ultimately, standing in the middle of Glasgow on a sunny evening with tens of thousands of other people belting out Somebody to Love brought me to joyful happy tears. Add in some ridiculous guitar solos, many many singalongs and as the closing gong from Bohemian Rhapsody rang out I headed off with a smile on my face.

All in Friday was a fun evening, Texas did their thing, I caught some of Gun’s set, and The Darkness were ridiculously rawk as always.

Saturday was my first Euro2018 Volunteer Training Day. I’ll be driving select individuals to their venues so it was mostly about routes and tracking software and the like. There was also the chance to drive the routes (which I knew most of anyway as I live here) and we even managed a sneaky visit to the Accreditation Centre and picked up our uniforms for the Games! It’s not as big a deal as the Commonwealth Games (which are the second largest sporting event in the world after the Olympics don’t ya know, and no the football World Cup isn’t even close) but I’m looking forward to being part of it for a couple of weeks.

Sunday and I headed back to TRNSMT. As I was there earlier it was a better chance to wander around, it’s a little smaller in terms of performance areas but as you can walk across the entire site in about 10mins I was baulking a little bit at some of the younger attendees claiming this was their first festival! Aye, go to the wettest Glastonbury, spend 2 hours slogging through mud to get from one side of the site to the other and THEN we can talk!

Friendly Fires were first up and played both tracks I know and were a pretty good mid-afternoon kinda band. Then it was time for two local bands, Franz Ferdinand were up first and are now definitely on the list of bands to see when they next tour; good tunes, good stage presence, and a good live act all round. Chvrches were next and to quote someone I overheard ‘for a wee lassie she’s got a fair set of lungs on her!’. Indeed, a great voice and some great tunes that had the crowd dancing.

And then it was time for The Killers and what a show they put on. I’m not a big fan so a couple of tracks weren’t that familiar but there is no doubting Brandon Flowers has stage presence and knows exactly how to manipulate a crowd, what a showman! Needless to say the biggest hits got the big cheers, add to that a cover of The Whole of the Moon by the Waterboys, an acoustic cover of Side by Travis (playing to the Scottish audience much?!), a guy called Tony getting called up on stage to drum for one of the songs and, from the opening ‘Hello Weegies’ welcome to the final hurrah of Mr. Brightside they kept everyone bouncing.

I’ll definitely keep an eye out for next years acts, the benefit of a city centre festival is getting home to your own bed each night, and whilst there was the usual share of drunken Glasgow bampots, I didn’t see any trouble at all as everyone was in such a good mood we were just laughing things off.

Needless to say I was pretty bust on Monday though but it does mean that I’m already on the countdown for Glastonbury tickets for next year, the festival buzz is back with a vengeance!