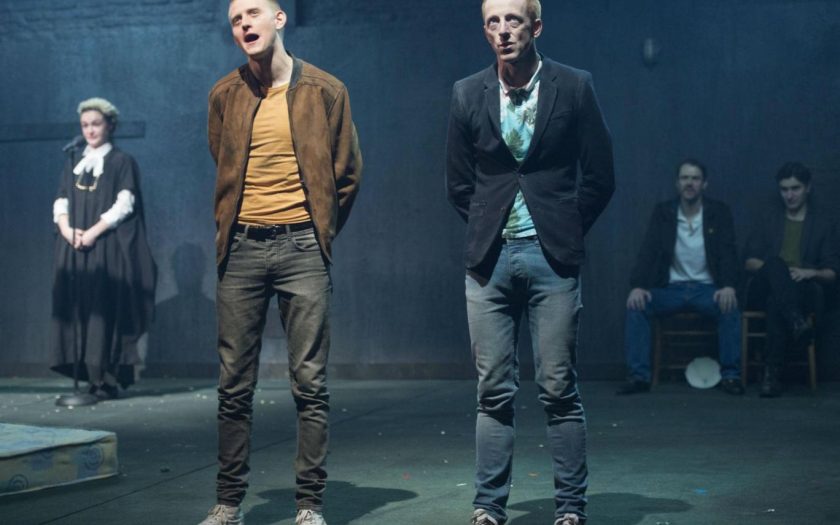 We all know Trainspotting, the movie. Based on an angry novel that rails against, well, pretty much everything it can, it hit a stylistic note that resonated, exposing the gritty side of life we all know lies beneath the social media glimmer.

This stage adaptation of the novel is a different beast, sticking closer to the novel and revealing two scenes which punch a darker, more twisted view on an already dark tale. However, for all the horror and despair, there are genuine moments of hilarity to balance them out. I definitely didn’t think I’d spend quite as much time laughing as I did.

Testament to the performances for helping move us from laughter to tears in short measure (the ‘baby death’ scene remains a harrowing, visceral moment), and it’s worth noting that most of the actors pull double, triple, and quadruple in one case, shift to keep the story moving as bit part characters drop in and out.

The staging echoes the overarching mood, harsh realities picked out in fluorescent, and some of the more powerful scenes are all the more striking for it. There is no hiding place for the audience here, nothing is shied away from, be it the desperate struggle to recover lost suppositories from ‘that’ toilet, to the moment Renton has sex with his dead brothers wife, right on his coffin.

Comparisons with the movie are easy to make (and lord knows a lot of the audience clearly had that frame of reference in mind as they whispered and giggled their way through the entire performance) but the latter mentioned scene was among the more powerful. I’d include the monologue from ‘Alison’ as she recovers from the death of her baby and a new life stretching ahead of her, all the while dealing with the type of asshole men that are writ large in the news at present.

As the closing scenes played out, I was left with a sense of a revitalised story, a raw view of how friendships can change and how ultimately we are all surviving as best we can, no matter what choices we have to make.