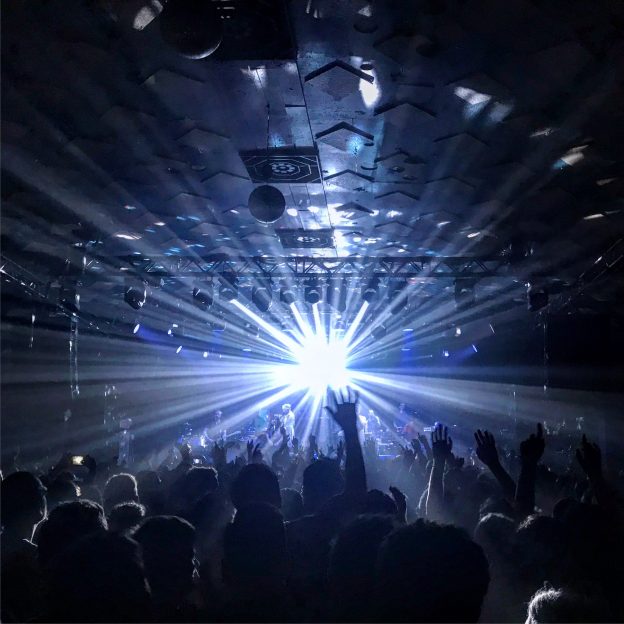 The Barrowlands is probably my favourite Glasgow gig venue. Large enough to generate a good crowd atmosphere, small enough to feel intimate, and tarnished enough to feel alive, I don’t think I’ve ever been to a gig there that wasn’t good.

Add in a band that has a good live reputation and it was with an intrigued anticipation that I stood and waited through the last couple of tracks of the support act, Hot Chip’s James Goddard, for my first ever LCD Soundsystem gig.

LCD Soundsystem have bounced around my music conscious since they first arrived, I was aware of them but nothing really clicked with me until Sounds of Silver where they started to make sense. That said their tracks increasingly find their way on to my playlists and after catching a little of them at Glastonbury I was keen to see a full show.

They played two nights in Glasgow – apparently they wanted to play more because they only wanted to play at the Barrowlands – and seeing photos and videos of the Tuesday performance only heightened the anticipation. I love live music, I love the way bands can play with a song, I love the altered acoustics, the energy and vitality that can elevate a so-so album track to an uplifting and transendent moment not to be forgotten.

Sometimes those moments are easily forged, if you are seeing a favourite band then it’s a short step to take (for me EVERY Elbow gig is the best ever), but if you are lucky a band can take your impression of them and weave it into something much much more. I had such an experience back in 2007, again in the Barrowlands, with a group that was just about to rocket into the stadium headling stratosphere. I’d listened to both of their albums but, going into that gig, I wasn’t massively convinced that Arcade Fire would be that big a deal…

And so it was last night. A band I know, but wouldn’t make my top 10 (20?) list, took my expectation of at least seeing a good live show, ripped it up, threw it in my face, then spent a couple of hours sonically hugging me whilst bashing me over the head with a ferocity that just isn’t evident anywhere on their albums.

Frontman James Murphy is transformed from a quietly spoken voice to a booming roar, exalting the crowd and pulling us into each moment with him. The songs become all the richer and more powerful as they are rendered into this wonderful communal space, full of passion and energy, which the good denizens of the Barrowlands were more than happy to absorb and reflect back ten times over, and so it continued, through song after song.

Add to all of that a band that were absolutely together (one over-eager drummer moment aside!), a light show that was as simple and effective as it was smart, and at worst this would’ve been a very slick, composed performance. Thankfully the enthusiasm of everyone involved – band and audience – made it so much more than that, and that is where the true amazing joy of this gig was found, a collaboration, a release of emotion, a raw connection.

I’m running out of hyperbole…

At one point last night it suddenly struck me that I was smiling, a great big wide grin, and had been for about an hour. I was utterly engrossed as the setlist lead me through a pitch perfect series of songs that seemed to build and build to the final piano jangling, anthemic chorus where I was bouncing along, hands raised to the skies, singing “where are your friends tonight?”

Answer, right here, all around me. This manic bunch of leaping lunatics, just as lost in the ecstasy of this moment as I was.

Thank you LCD Soundsystem, for bringing us all together for this. Thank you.