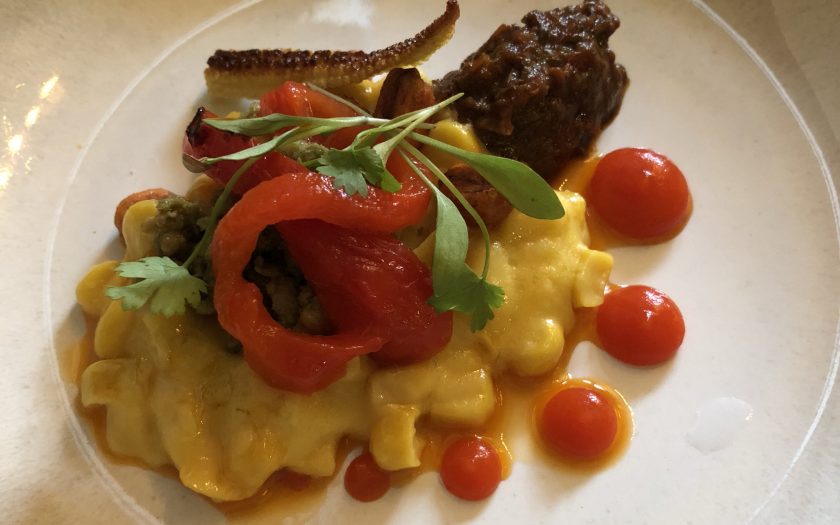 Glasgow has quite a few good Mexican eateries (Topolabamba being a personal favourite) so I was intrigued to see how this wouldn’t just be a more refined version of the usual taco, burrito, and salsa we all know and love.

Looking at the menu set my mind at ease a little, although my dislike of bell peppers (not chilli) already had me doubting the third course, ELOTE.

As I was driving I had a sip of the Apertif, a tequila and cointreau based pineapple margarita which certainly hit the mark, and then, as always, SNACKS!

There is a theme developing for the snacks, sourdough and flavoured butter (paprika for this menu) with some olives, then the ‘theme’ specific snack. The menu on the website suggests we were getting Masa Fries, with Jalapeno ketchup and Sweet Ancho Chilli Popcorn, what we got was nachos. Well, they LOOKED like Nachos and tasted like nachos, with rich and vibrant dabs of pureed avocado, that ketchup too. A nice way to kick start the palate.

I felt a bit odd eating the next course, it was a Wednesday evening you see which threw out my whole Taco Tuesdays thing… but they were tasty enough. I’m not sure I got much from the strawberry salsa, and the guacamole was a little on the thin side for my liking but overall a nice way to start the meal.

Of all the dishes the next one piqued my interest the least. Tomatoes are not high on my list of desirable eating and unfortunately this dish didn’t do much to change that. A fresh and cleansing dish for sure but it lacked any depth of flavour, or much in the way of balance. All of the flavours on the plate were gentle but didn’t seem to combine to be anything greater than their parts.

The third course was the one I was least looking forward to. I am not a fan of bell peppers and wasn’t convinced that pickling them would help. So being told on presentation that the dish also included smoked peppers and my heart sank. Ohhhh how wrong I was. Easily my favourite dish of the menu, the sweetcorn risotto was delicious, the pickled peppers (which I presume were picked by someone called Peter?) were a revelation only topped by the smoked peppers. Belter of a dish with some good hearty flavours that complimented each other without being overwhelming.

Sea Bass next, always a sign of a hearty dish as it takes flavours well and also a first try of escabeche for me. The mussels were tasty and the sea bass well cooked but the crab mole was a bit bland, thankfully the orange and pickled vegetables helped add some flavour.

The next dish was one I picked out as being likely to be a favourite, Pork cheek barbacoa. Alas whilst it was well cooked and well presented, it didn’t really hit the mark. It wasn’t bad per se just underwhelming on the whole and it was at about this point in the meal that I realised something that had been missing. Heat. Specifically, chillis. Not one dish had offered any subtle hint to what I take as being a quintessential part of Mexican cuisine, but perhaps that’s because I was basing my expectation on westernised Mexican cuisine? I’m not well informed enough to know but this dish seemed to highlight the absence of spice.

And then dessert. A friend of mine was dining that night, and we chatted as she left. She neatly captured the essence of this final dish for me “Nice but a bit too banana-ey”. She was right, the ganache was delicious, and some hunks of banana bread on highlighted just how ‘banana-ey’ the ice cream was but then, finally, we got a little heat from the chipotle and banana caramel.

As always, all of the food was well prepared and beautifully presented but on the whole this menu doesn’t rank high. It might be down to personal taste (isn’t it always?) but there just didn’t seem to be enough variation on each plate, too many pureed, reduced, and smoothed sauces, not to mention a distinct lack of big punchy flavours. Chilli or no, that’s what I expect from Mexican food and I think this menu suffers from those expectations. Does that mean the food was bad? No. It just wasn’t all that great.

That said, it was a pleasure to eat and I was delighted to have my expectation flipped on pickled peppers. And at £28 for six courses of wonderful food, plus £5 for an apertif and £5 for snacks (between two) Six by Nico continues to be ridiculously good value.

Hat tip to the staff as well, always friendly, and were very quick to remedy a delay between a couple of courses (we hadn’t even noticed) with the offer of a free drink.

And yes, we are already booked in for the next menu.