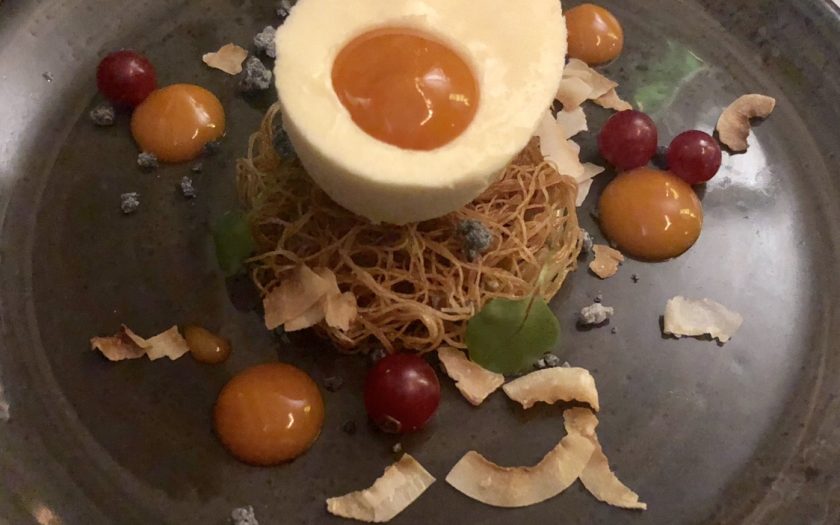 The eighth incarnation of Six by Nico and as we move into a new calendar year, they’ve decided to go back to some of the best dishes from 2017, but there was a twist!

The menu was announced on the 5th January, and in the days prior to the announcement it was up to the public to choose what dishes would make the cut. For each of the six courses we were given a choice.

Talk about Hobson’s Choice! Some of my favourite dishes weren’t even an option, no Picnic Blanket (Picnic), no Lady & the Tramp (Disney), no Sandwich Platter (Picnic)! That said, as they evolve each dish throughout the six week run of the menu, regardless of what the final menu looked like, I knew it would be a little bit different to when we first ate them.

And so, with all the voting in, the menu for our eighth visit (from the website) looks like this:

But first, as always, Snacks!

Definitely some favourites here (even though the snacks weren’t part of the voting), so we had Smoked Haddock Bon Bon, Truffle and Parmesan popcorn, and Peanut Butter Milkshake. The Bon Bons were rich and packed with full of flavour, the Truffle popcorn was lost on me (popcorn is weird), but hey who doesn’t like a light creamy Peanut Butter milkshake. Some great snacks but we were eager for the first course.

I was so pleased The Chippie faired well in the public voting as it was my favourite of all the menus and I had forgotten how wonderfully light the Chips and Cheese starter course was. A little cup of the rich and light espuma, with a nice mix of confit potato pieces, some soft, some ‘edges’ and the curry oil adds a very subtle aspect to the dish without overpowering it. I love to think I’d be able to eat a much bigger serving of this but it’s so rich, I think the portion size is about right.

My rants on what constitutes a proper pie are well enough know by my friends (who I was eating with) yet we didn’t really care when this delicious deconstructed plate of tasty offerings was put in front of us. The beef shin is the star, melting in the mouth, falling apart under the gentlest of prods with the fork, I definitely COULD eat a larger portion of this. The onion sauerkraut and brioche help bring it together and it was universally praised and quickly scoffed.

The Mac and Cheese dish I remember as being good but nothing to shout about. It hasn’t really changed in content or presentation but was an absolute delight. A ‘slice’ of thick and very cheesy macaroni, with succulent chicken wing in a light barbeque sauce, all helped by the nutty charred cauliflower, definitely seemed better than the first time round!

Next up, the Sea Bream Taco – and putting aside the fact that I didn’t vote for this – which was pretty tasty although the lime salsa doesn’t sit well on my plate. The fish is clearly the star here, perfectly cooked with a nice crisp skin, sitting on top of a slightly too oily taco, all of which sits on top of a delicious guacamole. A nice idea but one of those dishes you have to move around to eat (you try cutting a taco sitting on a pile of guacamole!). As always, all well presented, and tasty enough just some aspects aren’t for me.

The final savoury dish was one of my least favourites when I first tried it, but having seen it plated up at other tables, I thought I’d stick with it (I had contemplated swapping this course out for the vegetarian option which was the same dish but with beetroot instead of duck). Alas it fell short. The duck was better than the last time, but there just isn’t enough variety of flavour for me which was surprising given it was on the Illusion menu which managed to mess with visuals and flavours pretty well. One sad little pickled mushroom was all I had to give the dish some pop. A shame (especially when the other vote option was, notably, a lot better).

Thankfully along came dessert to rescue the day! Whilst I had voted for the Lemon Tart, I was just as happy to see the Egg dish arrive. Presented as half of a frozen coconut panacotta egg, with passionfruit yolk, it was packed full of vibrant flavours, and as it melted that panacotta adds to the sumptuous of the entire plate. Wonderful stuff.

We had managed to get a table right at the start of this ‘new’ menu, and as ever I know they will tweak the dishes as they work through the 6 week run, what’ll be really interesting this time is to see where they finally end up, having had 12 weeks to fuss and cajole these wonderful plates of food into something better and better with each presentation.

Overall, as always, a good evening of tasty food. Going in, part of me thought the idea of a ‘Best of’ would diminish each dish a little as I’ve tried them all before, but instead I found myself twice as delighted to be able to revisit some of my very favourite plates of food from last year again.

Have I mentioned that the set menu is £25 for six courses (and you can swap courses between the main and vegetarian options). Add in £5 for the ‘Snacks’, and £5 for an apertif, chuck a bottle of wine in and for £45-50 a head you are being treated to high end cuisine in a laid back environment. The food quality remains high, as does the execution of each plate. It really is a fine dining experience on a budget.