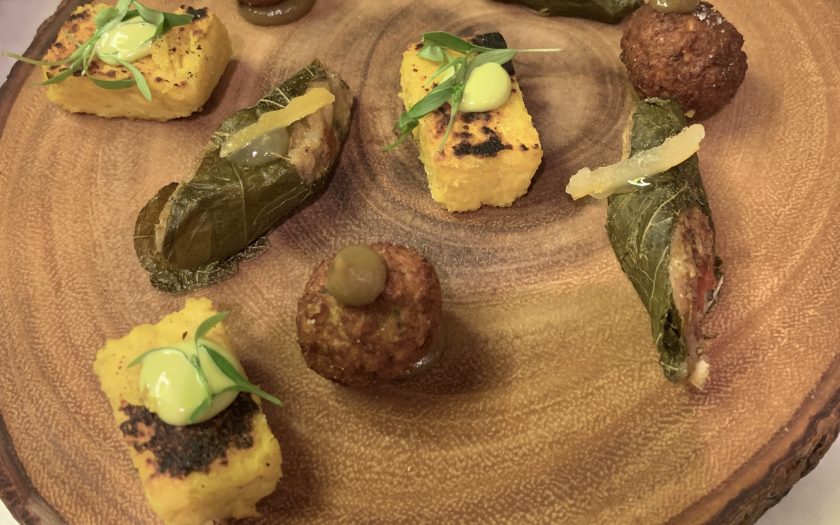 Back to Six by Nico for their latest menu – MIDDLE EAST – and I’ll admit upfront that of all the world cuisines this area is my least favourite (it’s all those olives) but as ever I entered the restaurant with a quiet optimism that my opinion would be swayed.

Antibiotics put paid to any apertif so it was straight on to the snacks last night!

Listed as Pitta Bread, Hummus & Green Harissa, Halkdiki Olives, Lemon & Chilli it was exactly that. Given that every snack option so far has included ‘bread and olives’ of some variety it’s safe to say this was a little underwhelming. The pittas were freshly made, but the hummus wasn’t anything out of the ordinary, but hey it’s just a little snack to get us rolling.

The first course arrived on a wooden platter, which didn’t strike me as very Middle Eastern but nevertheless offered us three small temptations taken firmly from that region. A deliciously light falafel on a caper and raisin puree (more please), a slice of rich kibbeh which needed the coriander emulsion to save it being too bland, and a duck leg dolma which was well prepared but only the preserved lemon gave it much of a flavour.

Not being a fan of fatty meats, the Kebab course was the least favourite going in. That said, the meat was tender and well seasoned, the pickled cucumber was an interesting addition that helped lift things, with the red cabbage slaw and yoghurt providing a nice crunchy tangy to counter the fatty meat. Better than I had anticipated.

I wasn’t sure what to expect for spiced cauliflower but I was delighted by the little bowl of veloute that was placed in front of me. Accompanied by a little side offering with a slice of picked cauliflower and two little deep fried florets, the veloute was utterly divine. Rich, creamy, lightly but obviously spiced, with tiny feta crumbs to pop some salt onto your palate, and a dash of rose harrissa oil to give a hint of warmth. I’d happily just have had a big bowl of that and some bread and go home happy!

One thing that Six by Nico has been consistently good at is serving fish and the Sea Bass was no exception. Perfectly cooked with a crunchy skin, and the light flaky sea bass was delicious. Not being a fan of Baba Ganoush I was glad for the little sweet pockets of flavour brought by the pomegranate, overall though this dish could’ve done with a bit more flavour.

The next dish didn’t really do much to lift the flavour profile of the menu either. A wonderfully moist chicken breast was helped by some dates, but the Surmac Carrot was tasty but without much punch. As ever, everything on the plate was cooked well but as a dish it felt a little lacking, perhaps the Orange Blossom could’ve been given a bit more of a tang as it hardly got a mention on my palate.

Ahhh Baklava, layers of pastry, drenched in syrup, with creamy pistachios and almonds and fruit and … well no. This version was three thick crisp layers, sandwiching dollops of hazelnut and chocolate creamaux, with sour cherries to the side and a dollop of a delicious Cardamon Creme Fraiche. It wasn’t overly sweet, which was good, with the cherries nicely balancing out the deep richness of the chocolate creamaux. That said, I’m hard pushed to see how it was anything remotely similar to Baklava but maybe that’s my own lack of knowledge of Middle Eastern cuisine at play? Regardless, it was a nice if confusing dish to end the meal on.

Overall, not a favourite. As ever each plate is well cooked, prepared and presented, but for me this was lacking in the things I associate with the Middle East, smokey spices, rich meats, and deep dark flavours.

Good food, friendly service and, I know I’ve said it before but it bears repeating, at £28 for six courses of wonderful food, plus £5 for an apertif and £5 for snacks (between two) Six by Nico continues to be ridiculously good value for such well prepared and considered food.