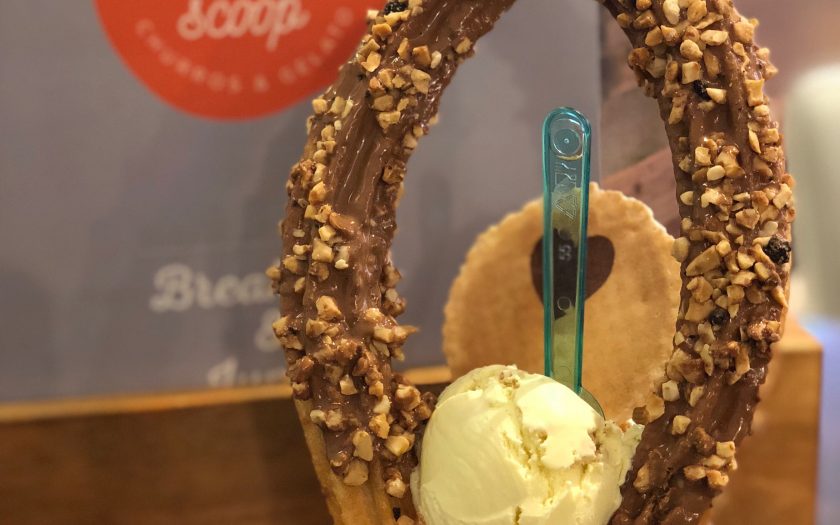 I love ice cream, I mean I REALLY LOVE ICE CREAM – it’s something I inherited from my Dad – but would another quality ice cream vendor really find a place alongside the Nardini’s of the world? Short answer is yes! The longer answer is a bit hot and cold…

To open a gelato and churros based venture in October, in Glasgow, does sound a bit bonkers, I mean even during the best of our summers we don’t get more than a few weeks of ‘ice cream sunshine’. But as October rolled around, so it was that Loop and Scoop burst into vibrant life. Sitting on Great Western Road, just up from Oran Mor, I passed Loop and Scoop on the bus everyday through the summer months, and I was a bit perplexed as I watched the bright orange hoardings that promised a ‘Summer Opening’ fade as the season changed and the temperature dropped. Had they missed the opporchancity?

Well it sure doesn’t seem like it as, since it opened, I’ve rarely seen it without a queue, either ‘out the door’ at peak times, or a handful of people hanging around late at night as they indulge their sweet tooth. Initial reactions on social media were good, so I knew I had to check it out for I too have a sweet tooth that needed to be indulged… and did I mention that I LOVE ICE CREAM?

And what a wonderful indulgence it is.

There is something special about freshly made churros coupled with some wonderful gelato, that really is comforting in a warming winter kinda way. It shouldn’t really work, the bulk of what you are eating is ice cream after all, but as the churros is made to order (which adds to the queues but remember, delicious things come to those who wait) it retains just enough heat to be cosily comforting.

I opted for the chocolate and hazelnut covered churros ‘loop’ and scoops of toffee apple gelato. The churros is lighter than any I’ve had, and chocolate melts slightly to create a sticky tasty mess, this dish is not one for those who don’t like getting their hands dirty! The gelato was good too, creamy enough without being sickly, and the small toffee and apple chunks added a nice additional texture. Delish!!! Mind you, next time I’ll probably stick with vanilla, what can I say, I like the classics.

They offer other items on their menu, which includes some brunch options, or you could just have churros and a dipping sauce on their own, or just a scoop or two of gelato but let’s be honest, having seen photos of their Loop and Scoop dish, it was impossible to resist their signature offering.

There is a definite rise in dessert focussed eateries in Glasgow, and whilst Loop and Scoop does have more traditional cafe food options, it’s fair to say that most people will be there for churros and gelato, so it’s just as well that they are so so good!

Loop and Scoop has been open for a few weeks now, it’s always been busy whenever I’ve passed it and, whilst part of me wonders how it will get on in the depths of winter, another part of me knows I am already planning to go back as soon as possible.

About Loop and Scoop
Background article.