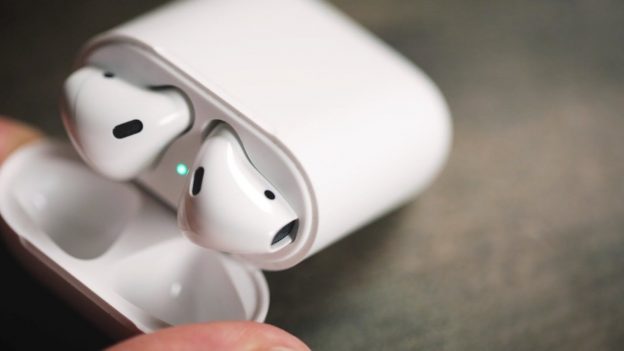 I’ve held off getting a set off these for some time but as my current ‘commuting’ in-ear headphones (JLabs Epic BT – discontinued) are starting to show their age, both in terms of wear and tear and in how the diminishing battery life is impacting the Bluetooth connectivity. Although admittedly the latter concern is purely based on my perception, but they do seem to drop the connection to my iPhone far more than they used to, even though I logically know that the science behind that thinking is bunkum.

I do have another pair of bluetooth headphones – my wonderful Jabra Revos – but I prefer in-ear for commuting as they let in enough ambient noise to keep me aware of my surroundings (the Jabras aren’t noise cancelling but are such a good fit they might as well be).

It’s taken me almost a year to get AirPods though. Whilst the Apple fanboy in me was intrigued when Apple announced their new AirPods last year, for once I was sensible and held off as I had a pair of in-ear bluetooth headphones already. Since then I’ve read reviews, some right after the announcement, some after a few weeks of usage, and on the whole they’ve been positive with the main gripe some people had was more around the fit than anything else.

I’ve used the Apple provided in-ear headphones in the past, and carry a set in my bag as a backup, and whilst they aren’t the greatest I know, they fit my ears and perform well enough for a 30 minute commute, but they still have that damn cable…

Fast forward to last week and more intrigue was added by Apple’s announcement that they were planning to add wireless charging (via a new case) for the AirPods. And, while I won’t be upgrading my Apple Watch to a Series 3 any time soon, that little demo of the AirPower (ugh) charging pad, where you plonk your iPhone X, your AirPods in their cases, and your Apple Watch, down on a single charging pad is definitely something I’ll move to in the future; one simple solution, rather than three messy cables, YES PLEASE!

I picked up my AirPods yesterday and after a couple of hours usage I’m was instantly a fan. The complete lack of a cable is the most obvious change, and the sound has definitely improved since I last used Apple provided headphones but the real win was the connectivity. Typically with my previous bluetooth headphones my phone had to be in a pocket on the right of my body (as the main sensor in the headphones was on the right hand side) and many times I’d end up carrying it in my hand as the signal dropped in and out at frustratingly increasing intervals.

These drops of connection only really occur when travelling/walking, where I want to have my iPhone in my pocket. This isn’t an issue when I use them at home, or at my desk at work, where there is nothing to obstruct the signal, but the minute you add a layer of fabric or two and WELC OME TO D ROP OU T CI TY!

Not so with the AirPods. Even when I deliberately tried to get it to drop the connection – I wrapped my iPhone in my hat and stuffed that in my jacket pocket, then swung my bag over that pocket – the AirPods kept on working.

Sound wise they are ok, yet it’s here (hear?) that I’m making a compromise of fidelity of usability. The JLabs Epics sound a lot better, but then they are a different design with soft rubber tips that sit a little deeper in my ear canal and create a better acoustic seal so I’d expect that. And it’s not that the AirPods sound bad at all, just that in a like for like comparison they don’t stack up all that well.

However, when you add in just how easy it is to pair the AirPods with your phone, and more importantly how easy it is to use them throughout the day (they power on/off automatically so no more re-pairing), I’ve yet to find a reasonable reason to criticise them. I COULD possibly complain about the price but then you remember that the Case includes a battery too and it’s hard to fault them.

It’s sometimes hard to judge a product like this without using them. I’d read a lot of good things about AirPods but they are, as many others have already said, a quintessentially Apple product.