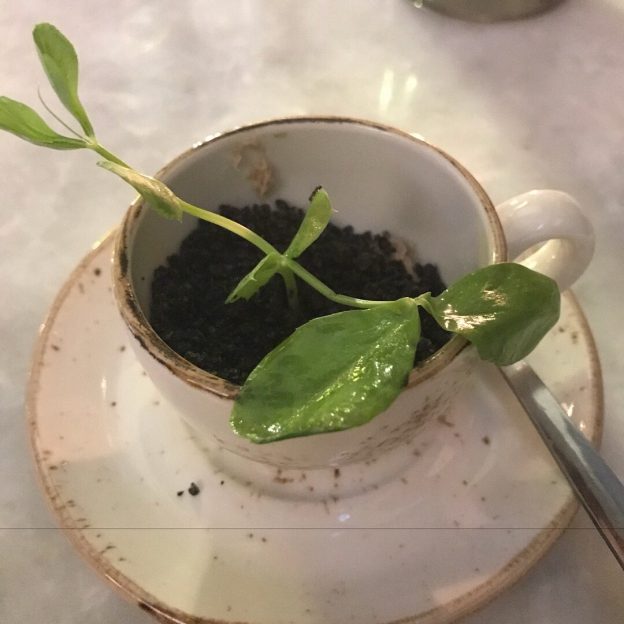 The fifth menu has arrived and so once again my intrepid friends and I ventured to Finnieston entirely unsure of what we were about to be offered.

Typically the menus that are published don’t really offer that much of a hint of what is in store beyond listing some of the core ingredients, and given the theme of this menu I’ve hardly bothered to do more than glance at what we will be eating.

Another wonderous evening of taste by @sixbynico

But first, as always, Snacks! Piggy Tea, Parmesan Royale, Smoked Ham Hough & Maple Syrup, Sourdough Bread… although this time as we had a Vegetarian friend with us, I shared the Mushroom Tea over a feta and olive tapenade. Holy umami batman, what a wonderfully rich complex set of flavours to kick off the meal. The mushroom flavour was strong but the olives added a subtler bitterness that meant, very quickly, I’d run out of bread from dunking in the deliciousness!

The first dish of the menu came as a cup of tea. A layer of dark toasted sesame seeds atop a wonderfully sticky based of shredded chicken. The kick of the pepper balanced the sweetness of the lemon thyme but the thick layer of sesame seeds really gave it some depth.

On to the ‘PORK FILLET’ dish and this, alongwith the dessert, was the one that really messed with my mind. As promised, the illusion was in the presentation. In front of me was placed a scallop shell, with two scallops… which were actually shaped from succulent cuts of pork. The first mouthful was a real head twister but pretty quickly I was happily enjoying this. A subtle warmth from the Baba Ganoush base played perfectly with the burst of sweetness from the pomegranate.

Now, I’m not a big fan of tomato (the tomato based course on the Route 66 menu was my least favourite for this reason) and again this one fell short on my palate. That said, it would’ve been very easy to presume I was eating steak tartare when the plate was put in front of me, including the wobbly ‘egg’ yolk atop the dish. That said, it was a fresh and light dish, although I think the goats cheese panacotta was a bit too bland, offering little more than a texture.

Porridge then, sorry ‘CULTURED OATS’ and at first glance that’s exactly what we got. A bit of a cheat mind you as the top layer of the dish is exactly that, a light porridge that was hiding a shellfish bisque and an unmentioned red pepper puree base. Ohhh and we got a slice of (prawn) toast as well. For me this missed the mark and whilst each flavour and ingredient was well prepared, it just didn’t really come together. Now, that’s likely because I don’t enjoy (can’t eat) red pepper so that was an instant ‘ugh’ moment, but aside from the pickled mussels (a wonderful revelation!) I can’t say I enjoyed this dish all that much. Ohhh and the prawn toast was far too greasy. I’d be interested to see if they tweak this dish in the coming weeks.

After a couple of ‘not great’ dishes, I was starting to worry. I knew I had a review to write and I’ve got a superlative quota to hit! Thankfully the next course got us back on track. And then some.

Admittedly the ‘DUCK’ dish wasn’t really much of an illusion but frankly, with food this good I was happy with a pretty plate of heavenly flavours. The duck was (I think) smoked and sous-vide to utter melt in the mouth perfection, and the accompanying ‘forest floor’ added to the textures with pickled blueberries being a new, and delightful, revelation. At times like this I find myself wanting to stop time so I can continue to savour the dish in front of me, with each mouthful of the succulent duck an absolute pleasure.

Alas all good things come to an end, and so the ‘WHITE CHOCOLATE’ dessert arrived. But wait, is this half a boiled egg I see before me? Indeed it was, except of course it wasn’t. With a passionfruit gel ‘yolk’ and an absolutely perfectly smooth white chocolate ice cream, on a bed of honeyed strands. Oh my heavens, what a way to finish a meal. The white chocolate was far more subtle than I was expecting so wasn’t as overpoweringly sickly as it can be, instead it had just enough sugar to counteract the sharpness of the passionfruit gel. Silence descended on the table as we all savoured each mouthful.

And then it was all over.

Even with a couple of dishes which didn’t really land well on my palate, I enjoyed this meal immensely. There have been hints of some of these dishes already shown in previous menus and whilst not each course really pushed the illusion theme (I’m sure the duck dish could’ve been more cleverly presented) overall it was another superlative laden effort, rendering myself and my dining companions speechless at times.

Once again I’ll close by pointing out that the set menu is £25 for six courses. It was also good to note that you can swap courses between the main and vegetarian options, which may help if one dish in particularly may trigger an allergy. Add in £5 for the ‘Snacks’, and £5 for an apertif, chuck a bottle of wine in and for £45-50 a head you are being treated to high end cuisine in a laidback environment. The food quality remains high, as does the execution of each plate. It really is a fine dining experience on a budget.

The next question is what will the theme be for the next menu which will be the sixth menu for Six by Nico!