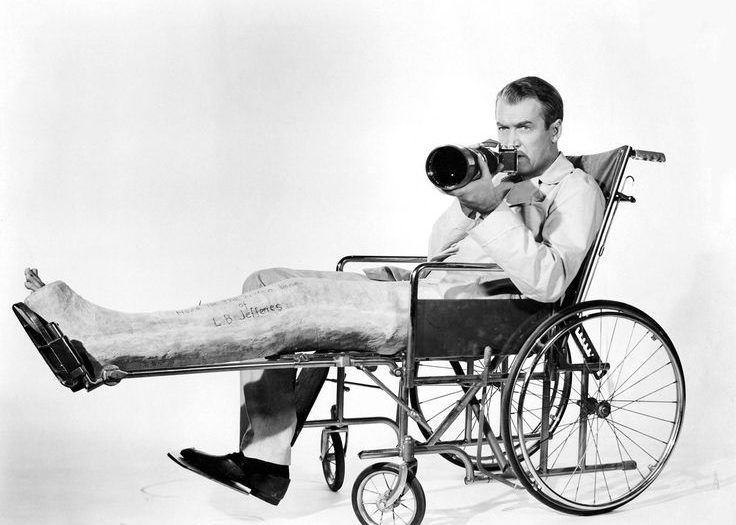 Vertigo is acknowledged by many to be not only Alfred Hitchcock’s best work but one of the greatest movies of all time. It is, and has been since I first viewed it, in my top 5 (usually in first or second place). The sense of creepy weirdness, the growing tension as Scotty pursues a vision of a woman he once knew, coupled with the now legendary reverse zoom shot to impart the very sense of Vertigo that ties the whole slightly unsettling movie together, I have seen it far too many times yet it never feels old.

Both lead actors, as many did back then, tread the line of ham acting at times but if you look past that (and the obvious age gap between lead male and lead female, again a common weird theme that Hollywood continues to perpetuate) I think they both do well to convey two sides of the same coin, both knowing deep down that something isn’t right with what is going on, but both so flawed that they can’t NOT be a part of it, can’t stop it playing out. It’s that very human element of the characters, the twisting of normality into something odd which becomes their new normal, that I find so appealling, so real, so identifiable.

How often have you looked back at a situation you were in the middle of and wondered, how did I end up there? It’s that aspect of humanity that always fascinates me, how we can allow ourselves to, increment by increment, change our world view and accept was is in front us as ‘normal’; The Stanford Prison Experiment can be held up as an extreme example.

It’s this fascination that pulls me back to Vertigo, time and time again I find myself gripped and drawn in to the angst and continued sense of foreboding that bumbles along in the background. Whilst not a scary thriller, I find the slightly off-kilter nature of it all endlessly fascinating; a trait it shares with The Shining (check out the documentary Room 237 for more details on the weirdness that is The Outlook Hotel). That sense of ‘not normal’ is something that, given I haven’t exactly lived a ‘normal/traditional’ life in some ways, maybe makes it easier for me to accept people acting in ways that look odd from the outside yet will likely feel very natural to those living in those moments day to day.

Hitchcock had many flaws as a director, and as a human being, but when he got things right the results are wonderful and his choice of stories are always a big part of that. Add in his talent for visual flair, and a seemingly natural inclination to iconic scenes (played out to grand effect in North by Northwest). His attention to the small moments and how he leans on the details of the performances of his actors, skills learned from his early days in the (silent) movie business help elevate the movie to something more than the sum of its parts and, I believe, earn it the right to be at the top of cinematic pile.

Yet with all that ability to give us grand vistas and sweeping broad themes when Hitchcock started to deliberately limit the scope of his visions and the scale of his sets, think Lifeboat or the ‘one-shot’ Rope, is where he maybe plays best and all of the lessons learned in both styles of movie culminated in 1954 with the sumptuously performed, shot and directed Rear Window.

The setting and backstory is key to helping narrow the constraints of what, and where, things can happen and this in turn lets the actors carry the movie; James Stewart gives his usually solid performance and is the perfect lens for the viewer, the interplay between Jeff and Lisa (Grace Kelly) are light and realistic and the scene stealing asides by Stella (Thelma Ritter) bring this claustrophobic masterpiece to life, seating it in the best type of ‘everyman’ conspiracies that Hitch loved so much.

After Rear Window, Hitchcock moved up and out again culminating in the aforementioned, iconically scened, North by Northwest before returning to the confines of the Bates Motel… and we all know how that ended up.

And so it turns out that my favourite Hitchcock movie is one I often overlook yet is the most Hitchcockian of them all. A nice twist on a straightforward story, some excellent acting, humour, thrills, and of course a sight of the portly Sir Alfred himself (26 minutes in if you want to check). And you can’t really ever go wrong with Jimmy Stewart and Grace Kelly, can you.

Rear Window is probably the first clever movie I ever watched. It was a world away from his earlier movies with actors moving from scene to scene, location to location, which allowed us a pause, a breathing point during those transitions. His other movies largely have story twists to carry the entire movie (Dial M for Murder is not awash with wonderful performances) but the confines of the apartment blocks in Rear Window forces Hitchcock to adapt and switch styles, once the action starts there is no escape, like Jeff we cannot get away to a different place, we are stuck and have to watch it all unfolded, rapt and stuck on the edge of our seats.

I’m currently re-watching the rest of his movies, and whilst I struggle with the representation of women in all of them – you need only look at Tippi Hedren as an example – but throughout them all is a deftness of camera work and scene management, and a focus on the story above all. Hitch knew how to build tension, how to allow gaps, when to make us laugh, when to make us relax, and embraced all aspects of movie-making as part of a whole experience.

In his wake Spielberg was the next, most obvious, example of a true master of the cinematic experience, building visuals, sounds and knowing that it was just as important NOT to show the viewer details (how many times do you actually see the shark in Jaws?). Even in Hitchcocks earliest films, which were a little too keen to make sure the audience was following along, there is a tension, a knowing nod to the audience that whilst you might know some of the things that are going on, you don’t know everything.

I watch a lot of movies and most of the best examples, or at least most of my favourites, of the genre share some common traits; they are well shot with each frame telling its own part of the story, the directing is tight enough without suffocating the action and muting the story, and you are brought along on the journey with enough detail to enlighten but not so much as to remove the intrigue. That all adds up and helps me suspend my belief and buy-in to the world the movie inhabits. Hitchcock understood that this was key to get audiences to want to watch his movies.

One of the many phrases associated with Hitchcock is “Master of Suspense”, and given the breadth and depth of his work it’s not hard to understand why.

The big question is what to watch next, The Birds? Psycho? or Dial M for Murder?

I’m leaving Sleeping Giants, but not because I want to
10 July 2020
Confederate Statues Were Never Really About Preserving History
10 July 2020
Asian Americans Are Still Caught in the Trap of the ‘Model Minority’ Stereotype. And It Creates Inequality for All
9 July 2020
Scotland will become the first country in the world to add LGBTQ+ history to school curriculum
7 July 2020
How to build a ‘rest ethic’ that is as strong as your work one
7 July 2020
The Walkman, Forty Years On
6 July 2020