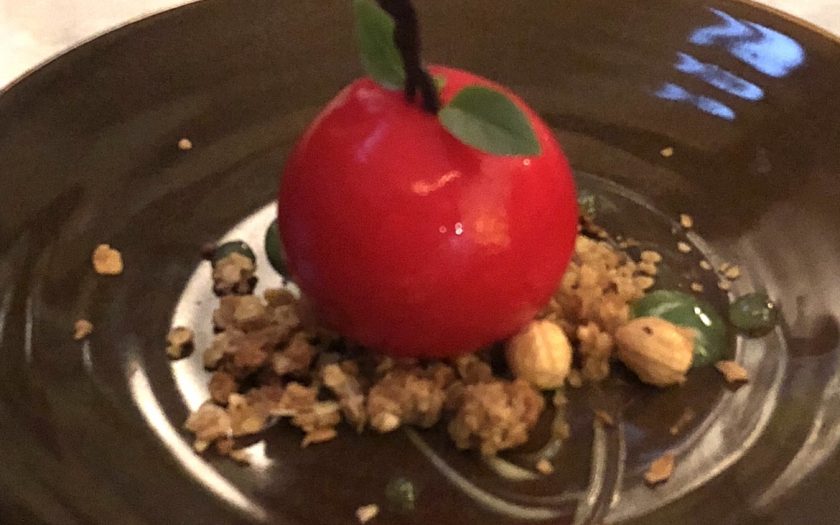 It’s been far too long since my last visit to Six by Nico but – boy oh boy Riff – it’s sure been worth the wait!

The last menu – a best of complilation – was a nice way to kick start 2018 but as soon as I saw the first listing for the new menu I knew I had to start spreading the news… (ok, I’ll stop with the New York based puns… maybe).

And what a menu, go on, pick a bad one from this wonderful line up!

A menu so good they named it twice, New York New York, another stunner by @sixbynico

But first, as always, SNACKS!

Actually, that’s not true. Hat tip to my apertif of choice, a tall slim cockatil of lychee liqueur, Caorunn gin (one of my favs), and cloudy apple juice. Wake up tastebuds, it’s eating time!

I should at this point mention that a colleague had already been to try this menu and, on his recommendation, we plumped for a snack plate each. Normally these are made for sharing but he assured me this was the best route.

Reader, he was not wrong.

The snack was a Pulled Pork Slider, with Smoked Mozzarella on a toasted brioche bun and a thick smoky barbecue sauce. It’s small, but even then I found myself eeking out every bite, desperate to make it last longer. I decree that, from henceforth, all mozzarella served before me shall be smoked!

The first course was a little fluffy bagel, with a delicious salmon cream cheese, and just enough dill pickle gel to cut through the richness. It was the smallest plate offered but delivered a ton of flavour. Think dawn spring sunshine in Central Park, a hot cup of joe and (a couple of) these wonderful little bagels. Yes please.

As the day moves on and the sunshine develops, it’s time to spread that Picnic blanket and grab some tasty fried chicken. And, Nico style, this turns out to be succulent confit chicken thighs, with a warming spiced crust on a smear of mousse with yet another new delight, pickled celery. Those tiny spots of sweet sharpness kept the dish from being too claggy, and the gentle building heat was perfectly judged, hot but not overwhelming.

Of course, if you’ve been wandering and doing the tourist thing, a tasty brunch always helps keep the energy up and if every brunch I had was as delicious and more-ish as this one (although to be fair, most brunches are bloody awesome) I’d never leave.

A slow cooked egg, scotch style, with a puff pastry encased disk of rich, deeply smoked, ham hough, with a few dabs of hollandaise to cut through the rich fattiness. If anything this dish could’ve done with a little more of the hollandaise but it’s a minor gripe because I could quite happily have eaten this several times over. The ham hough in particular was an utter delight for the tastebuds.

Of course, New York has a darker side, so tread carefully or you might get the attention of the Codfather… which wouldn’t be a bad thing to be honest. A perfectly cooked serving of fresh cod, fregola pasta in a herby rich broth, with sundried tomatoes and a dollop of trapanese pesto. Of all the dishes, and for one ingredient only, this was the lowest point of the menu for me; what can I say, me and olives don’t agree. That said, I still ate it and if I had the chance, would order it again. Sans olive, obviously.

There are two meat sandwiches that always make me think of New York. One is a pastrami on rye, hold the mustard, the other is an item that regardless of where I am, if it appears on the menu I’m likely to order it. I mean who doesn’t like a good Reuben?

My only fear with this dish is that, quite possibly, it has ruined all other Reubens for me, even though the Six by Nico adaptation isn’t even a sandwich! No, instead you get some of the juiciest, beefiest, most tastiest (it’s a word, shut up!) brisket that I have ever had the pleasure of slow savouring. A little square of fried barley risotto, and of course a nice tangy russian dressing, and some charred lettuce leaves completed the dish. I may need to look up a few new words for the brisket though, utterly utterly supreme.

As ever, suddenly, dessert appeared.

I should state that my cheesecake preference is ALWAYS baked and preferably without any gunk on top. Baked vanilla cheesecake is a thing of delight. I may have to change my preference now.

Served as a shiny red apple, with a (green) lemon curd core, from the first mouthful to the last plate scraping scoop it was perfect. The light cheesecake, the subtle curd balancing the sweetness well, and hell even the granola was tasty! What a wonderful, beautiful end to what was easily the second best menu they’ve ever presented (and for the cost of an olive or two, could’ve taken top spot for me).

Comparing to previous menus is, of course, nonsense but as I’ve still not missed one (yet) and it’s good to look back and marvel at some of the stellar food on offer here. £25 for the basic menu, a few quid more for the snack and apertif, throw in a bottle of wine and for about £45 a head you can eat like a very very lucky member of the royal family. What’s not to like?