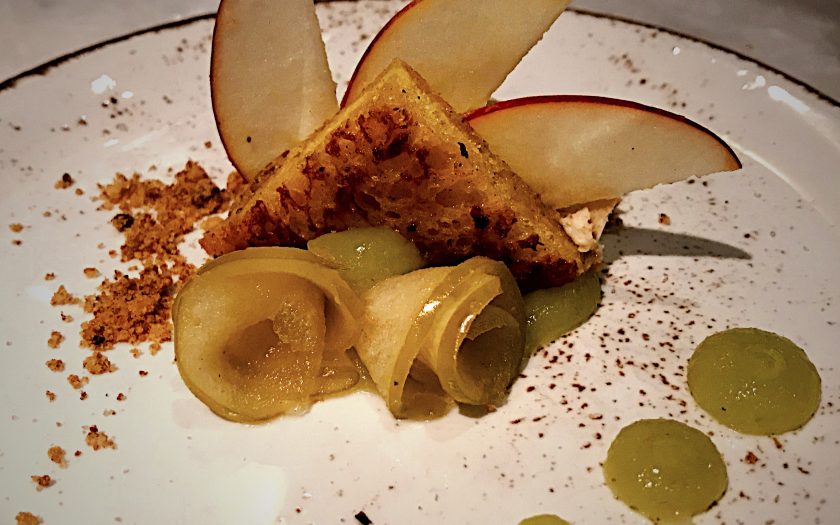 The sixth menu at Six by Nico would surely have to be an affair to remember, right? Well I’ll admit I was a little underwhelmed by the menu this time around but, having been pleasantly delighted in the past, I still had a little tremor of excitement as we sat in Kelvingrove Cafe prior to the meal.

Six by Nico: Forest. Not a bad course among them, but doesn’t quite pip The Chippie as my favourite menu (so far)

The menu for our sixth visit (from the website):

But first, as always, Snacks!

These weren’t listed when we booked so it was only when we arrived and got to see the menu that we had an idea of what was in store. It turned out to be two perfectly boiled quail eggs which were deep fried in a crumb (parmesan I think), a tiny beetroot meringue with wonderfully sharp goats cheese filling, and the smoothest, richest, earthiest wild mushroom veloute I’ve ever had. Ohh and some sourdough bread and truffle butter.

Some big flavours to get our palettes tingling before the first course arrived.

I’m not a big celeriac fan so was quite glad that the little cube was sitting in a delicious rich red cabbage gazpacho. However, despite having eaten here five times already so I should’ve known better, the pannacotta was wonderfully subtle and gave a rich creaminess to the gazpacho, with a few drops of truffle oil floating on the top making all the difference.

Swiftly after, a point I’ll come back to later, was the smoked pheasant terrine. Telling this was the least favourite dish of the evening for me and my companions. That’s not to say that it was bad, it was well cooked and presented but just seemed to lack any real flavour punch, it was almost as if the lifting of the cloche, released more than just the smoke it was containing.

Having not had gnocchi for a long time I was excited to try the next dish, but obviously the star of the show was the foraged wild mushrooms. Coupled with some parmesan shavings, a parmesan crisp, and a return of the wonder that is the humble truffle, this was an absolute belter of a dish. A mixture of textures and flavours from the different types of mushroom, including a few pickled ones just to give a quick sweet vinegar hit to the tastebuds, coupled with the parisienne gnochi and the parmesan and I’d have happily have eaten this dish twice over.

At this point we had to ask for a little extra time as the plates had been coming out thick and fast. It’s not the first time it’s happened and is probably where you’d expect the restaurant to make some improvements. The food is very high quality but occasionally the service lets things down a little. Of course they were very accommodating but it was good to have 5 mins or so to appreciate the previous dish before the next one arrived.

I’m not quite sure how they cooked the trout – I’d guess at sous vide – but it was delicious. I’d never have thought to pair trout with hazelnut but the toasted hazelnut crumb was a wonderful compliment to the gentle flavours of the trout. I’m not sure the wild sorrel and chard added much to the dish though, but sometimes simple is best and the trout was quite happy to speak for itself.

Grouse or Venison? We all chose venison! And ohhh my heavens what a wonderful plate of flavours, textures and surprises. The venison fillet was cooked to perfection, with a wonderful sear on the soft tender slices that melted in your mouth, and the accompanying beetroot sauerkraut was rich without being overpowering. The burnt onion jus, blackberry reduction, a few bits of blackberry, and some small cubes of beetroot were dusted with a dark cocoa powder and it all came together in a rolling mesh of flavours.

The venison was by far the stand out dish last night for me, although part of me is regretting not taking the grouse option. I’ve tried grouse in the past but I’m pretty sure it would sit well as a replacement for the venison on this plate. Well worth considering.

As ever, with good company and stellar food, time flies and I was, once again, taken aback that we’d reached the last dish of the evening. Trio of apple doesn’t sound all that inspiring but as the plates were presented it was clear this was a lot more than just ‘apple three ways’, turns out it was ‘apple four ways’, with a sharp green apple gel to one side, a couple of apple flowers drenched in a light syrup, some fresh cut red apple slices, and the entire dish sat on a bed of apple puree. Add in the cinnamon chantilly, the brioche parfait, and a wonderful crumb topping and this dish would’ve sat well in the Childhood menu… a very sophisticated, deconstructed, apple crumble! Plates were soon cleared for this one!

And then it was over. The sixth menu of Six by Nico was definitely a hit, with only one dish that didn’t really dazzle, but I’m being very picky as the level of cooking is consistently high across the board. Even the ‘ok’ dishes are of a standard that many other restaurants don’t achieve, which is why we keep going back.

Is this michelin star level food? Perhaps, but I don’t think the restaurant is set up with that in mind, and whilst I think the food could be (if you collated their best dishes into one menu… hint hint Nico!) but the serving style can be a little off beat which is absolutely not an issue for me, but likely falls short of michelin standard. But then that isn’t the point of Six by Nico, it’s always been a relaxed, informal, fun experience that just happens to have amazing food on offer.

Have I mentioned that the set menu is £25 for six courses (and you can swap courses between the main and vegetarian options). Add in £5 for the ‘Snacks’, and £5 for an apertif, chuck a bottle of wine in and for £45-50 a head you are being treated to high end cuisine in a laid back environment. The food quality remains high, as does the execution of each plate. It really is a fine dining experience on a budget.

For the last few visits we’ve taken to trying to rank each menu. We were in the midst of this conversation when the bill turned up and our server asked how our meal was. We mentioned we were ‘ranking’ the menu and it turns out that our pick of ‘best’ menu is what most people have said! The Chippie remains everyones favourite.