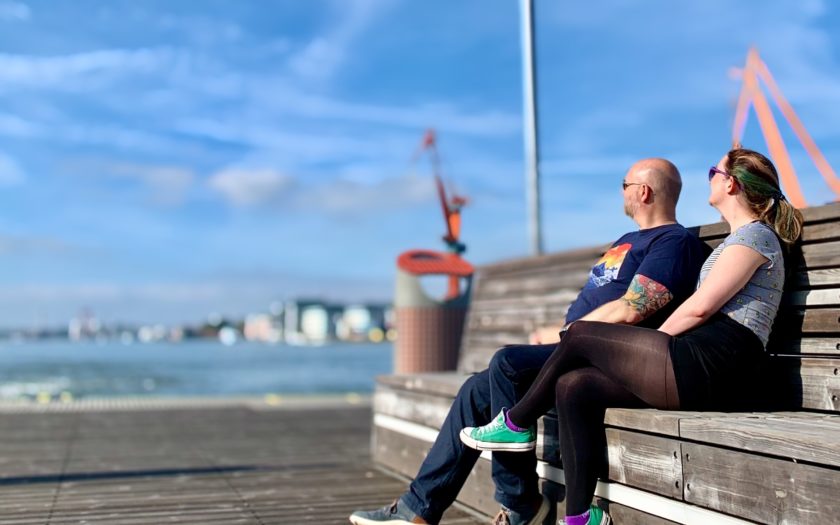 It was around about now, some nine years ago, that the house my ex-wife and I had owned in Hamilton sold and I found myself on the hunt for a place to live. We’d agreed to separate earlier in the year, and had started making our own plans for our lives apart and this was the last vestige of our shared life. A tale of two lives indeed.

I had already decided to move to Glasgow specifically to the West End as I’d always enjoyed it’s mix of old and new; the grand spacious tenements, the constant buzz as new influxes of students descend on the area each year, the mix of working class, artists, and the aspiring upper-middle classes (so bourgeois darling!).

The timing was less than ideal and I quickly found myself upping my budget so I wasn’t in direct competition with the aforementioned, newly arriving, students. And so after some fruitless weeks visiting tiny box after tiny box, I finally found a nice flat with big rooms in a good location. It was an open viewing and there were several other people there also making appreciative noises, and so the next morning I resorted to ringing the letting agency 15mins before their office opened. Lo and behold someone picked up and the flat was mine!

It was a perfect base from which to begin a new chapter in my life, with my home city of Glasgow within walking distance. I moved in a couple of weeks later and not long after that I joined the local Yelp community, which remains one of my better decisions as I’ve made friends there that remain to this day. I was already using Yelp as a way to find places to visit, places to eat, and on my first ‘community event’ (a pakora evening in Mother India) I happened across a work colleague, what a coincidence, from there … well, I’ve mentioned this before (in what appears to be staggering foresight but, well, I didn’t know then what I know now).

The next years staggered forward with nary a plan in sight. My career was going well enough, a new role gained, trips to our offices in Belfast, Boston and Sunnyvale (California), and a memorable customer visit to the headquarters of Sears – a vast building about the size of two large UK shopping centres, which had two full size coffee shops as well as a massive 2000 seater canteen that had more food on display in one place than I’ve seen or since, it took us 20 minutes to walk from the entrance to the meeting room – and it felt I was on the right path, finally.

My career had always been a thing of change. I studied Electrical Engineering but left college early and worked in the local McDonalds before my Mum found a job advert for me which took me to a small cottage and started my first career in technical authoring (writing software manuals). A year later I was made redundant and ended up moving to the south of England with a job secured in Aylesbury, a year and a half after that another redundancy, a brief six months working in Reading and a return to Scotland (Hamilton) before I ended up at a software company that changed names five times, and owners twice, before they too made me redundant. A frantic few weeks (with a holiday in Singapore in the middle) got me to where I am today, contracting in a bank doing ‘IT stuff’.

Lesson learned, careers can be planned and targeted but will always be at the mercy of those capricious cherubs of fate. In a way I was lucky to go through two redundancies so early in my working life, as it made me realise that whilst you can have hope and dreams, and work hard to better yourself, you are never fully in control. I have chosen to leave two companies of the six I’ve worked for so far, and as I get older, so the work and the people become more and more important to me. Who knows where my next career move will be, but as a lot has already happened in the intervening nine years I can only presume the same for the next nine?

On a more personal note you could also say that matters over the heart and the intricacies of relationships are as much influenced by chance as they are fate. Not long separated, with a new flat, so came a new relationship and with it other new experiences, a chance to explore more of myself once more and a door that opened to yet another, simultaneous, relationship. It was all very new, and was as rewarding and fun as it sounds. To have two partners, who are fully aware and comfortable living in such a relationship structure was not something we happened upon, it took work and effort and emotional growth and many more things but I’ve written about being poly before.

So if you fast forward through the last nine years and I’ve moved home twice, been through two polyamorous relationships, attended Glastonbury a few times, been made redundant for a third time and subsequently switched careers, made many many new friends, and spent the entire time exploring and learning as much about Glasgow as I could. I also spent a fair amount of time discovering and understanding more of myself.

There have been family members that have passed, others got married, my gorgeous little niece arrived, both my parents health took a hit, and through it all I’ve been lucky to have had the love and support of my best friends and my wonderful family who have never batted an eyelid no matter what news I turned up with. I am very lucky.

It’s been a wonderful nine years for the most part. I find myself looking forward to what the next nine will bring and feel much better equipped as to whatever life will throw my way, although I must admit it does help that I have much more clarity as to what my future holds…

About a year ago life, as it is prone to do, threw me another curve-ball and it’s safe to say that I find myself at a very different place both figuratively and literally, one I would not have predicted as the freshly divorced singleton I was all those years ago. We moved in together early this year, her two wee staffies are now our two wee staffies, and I feel happier and more content with each passing day. We frequently comment to each other that whilst this has all happened quickly, it has never felt rushed and has always felt natural and right and easy and stress-free. We make each other laugh and smile. She is my best friend.

If you’d told the newly divorced version of me that this is where I would be today I would not have believed you. There are plans for the future and I am excited for them to arrive and every morning I wake up and smile.

Over the past nine years (and many before that) I made many mistakes and with hindsight of course there are things I’d do differently, but we can’t go back, we can only look forward and the path ahead of me looks so much richer these days. I will make mistakes in the years to come as well, but I take solace that no matter what happens I have people in my life who love me as much as I love them and who I can rely on (and not JUST because I know too much about them…).

If the last nine years have taught me anything I’d be a fool to share it with you as my life, my decisions, and the path I took to get to where I am today will not be the same as yours.

Yet if I were to pass on any learning let it be this; Say Yes more than No, surround yourself with positivity and love, accept that you have and will make mistakes, and focus on living life not owning things. Laugh more than you cry.

Who knows maybe the next nine years, with all the wonderful adventures it will bring, will see me finally embrace that advice for myself. Regardless I will face it all with a smile on my face and a heart full of love, and no small amount of dog hairs on my clothes.