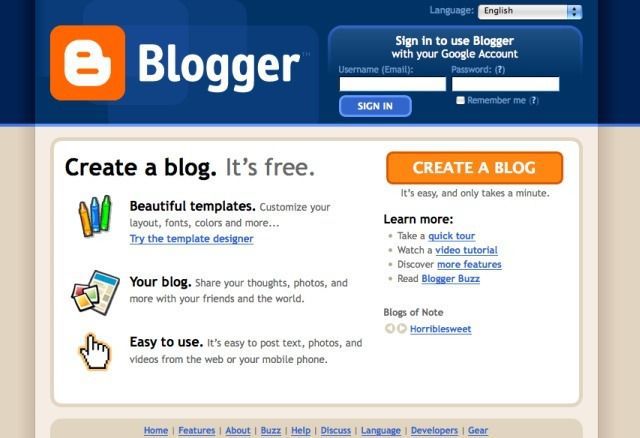 Is it just me or are the number of blogs on the rise again?

Despite all the other methods of social media available, blogging remains a unique option, better suited to those wishing to publish thoughts, ideas, commentary and the like, than the more recent incumbents of Twitter, Facebook, and Instagram. Honourable mention for Tumblr but it just never had the richness to provide great content, and I think remains a little too focused on its own model of interactions rather than the content it holds.

As a long-term blogger (aka old git) it’s interesting to see the ebb and flow of popularity that blogging goes through. I think this is the third or maybe fourth wave of ‘the rise of blogging’ that I can recall and each time things change a little bit further without ever straying too far from the basic roots of blogging.

Yup, when I started round ‘ere it were all but fields…

Blogging is about mostly about words and links (I’m putting photo only blogs aside for now). Some blogs are heavier on one than the other, the best have a mix of both, and they all tend to be well written with a distinct voice. Admittedly, those are pretty wide parameters, which have been continually tweaked and stretched over the past 20 years and my blog is a reasonable example of this evolution. It weren’t always such and if you head back through my archives you’ll see I started writing short pieces every few days, then through the next couple of years (as soon as Blogger came along) I began publishing new posts multiple times a day, often linking to something interesting I’d just found and over time, as I wrote more often I found more and more of my ‘voice’, despite not ever having much of an audience (or much in the way of quality).

Today a successful blog is just one part of an online presence, sitting alongside Instagram perfect photos, sound-bite worthy Tweets, a stream of Snapchats, and lots of promotion; Read my new post! Yeah it’s not actually new but I need to keep my presence refreshed so I’m posting it again for the umpteenth time this week but hey, my stats say these are the best times for interaction/hits so I gotta do it to stay relevant!!

I see talk of things like discovering your brand, of finding the perfect grid, of honing your voice. It were ever thus of course, just that the terminology has changed a little as blogging is, for many, a business not a hobby and understandably that leads to a focus on views, hits, and stats, and as they start to grow their brand, so the focus turns to monetization (if that’s even a word) and the key to social media hierarchy, influence.

I know several bloggers who have successful blogs, that are well written, personable, gorgeously designed and well presented, and they deserve all their success for their hard work. Yes, it is hard work to maintain a blog over a long period of time, to find your voice, hone your craft and produce content regularly. Any old fool can churn out a 500 word diatribe and throw it into a templated design, but to build an engaged audience takes a level of honesty and integrity that not everyone can maintain.

To which I should admit that I look on at the latest crop of successful bloggers who appear (although we know how looks can be deceiving) to be having that ‘better life’ and I wonder. When I started my blog, if I’d really gone for it with a passion, could I have been as successful? (hint: no, or I’d have done it already).

This isn’t a grumpy old man rant though, I’m not bitter about those people as they all work hard to get to where they are, it just isn’t for me.

Which begs the question, as blogging has changed so much, why the hell am I still doing it? If it ain’t for the money and the rewards then why keep doing this, I mean, it’s been twenty years!

Let’s cut to the chase. The reason I still write and publish posts on this blog is down to pure and utter vanity. I can parcel it up any way you like, put a big bow on it and say that this is a way to process a whirl of random thoughts (which it is), or that I continue to post in the (vain!) hope that someone else might find something I’ve written useful, or perhaps I would even go so far as to suggest that my voice is actually important, my opinions should be heard, and I’m actually utterly dismayed that my blog is not more widely read but hey, I’m not that (white) guy and, frankly, I’m amazed that anyone person reads this at all. Aside from my parents of course, they remain my most loyal of readers but that’s largely because I’m a terrible son who doesn’t see his family often enough!

Essentially though, and I think whilst the means may differ, all bloggers have the same end goal in mind when they hit Publish. They want to be validated, they want to be heard and noticed. Even if it’s only a little as sometimes that’s all we need.

When I started out, part of my reason for blogging was purely the fact that I, little ole me, could write some nonsense and with a few HTML tags, and a quick FTP upload, it would appear on the internet right there next to Yahoo News! You’d search AltaVista and find my website, or perhaps you’d spot it in the list of 30 or so in the UK / Weblogs category in the Yahoo directory. Regardless, there was a strange ego boost to seeing something I’d created ‘up there’ with all the others, all of which I presumed knew exactly what they were doing and why whereas I was making it all up as I went along. Ain’t hindsight wonderful.

However, it soon became a vanity project and with valid reason for a while when I separated out my professional thoughts to a separate blog. That got me a couple of speaking slots at some industry conferences and made me very aware of being fairly high profile, admittedly if only in a small professional circle. Yet it was never something I took over into my personal blog, other than one presentation I did on blogging many moons ago, it remained a hobby.

All of that ‘fame’ happened just before the latest wave of social media, Instagram wasn’t long launched, Snapchat was a few years away, and Twitter was king with all the cool kids. I was still blogging, but it was starting to feel very much like shouting into the void.

I’ve been lucky. I am still in contact, even if it’s just social media contact, with some of the bloggers that started around the same time as me, some of which are still blogging as well (we are a stubborn bunch!) but the longer this blog goes on, the more I wonder why I keep doing it, it’s a habit, sure, but is it a bad one?

When the 20th anniversary of this blog rolled around I contemplated closing it down and as each post becomes more and more of a challenge that may still happen and I can’t imagine many people will mind. What’s more important is whether I’ll mind or not, and therein lies the root of this to-blog-or-not-to-blog angst.

For a long time I wrote fairly intimately about various aspects of my life and whilst I stopped shy of discussing my sex life, other aspects of my personality, my sexuality, my political leanings, and my feminism have all been fair game. Yet over the past couple of years I’ve gotten away from that. It probably, unconsciously, started when I went back for some counselling a few years ago and while that prompted some deeper introspective posts, I’ve not really been quite as forthcoming as I have been in the past.

Perhaps it’s the growing sense of my place in the world, something I’ve touched on many times, and my growing belief that the only thing I should really be doing with my voice is to amplify the voices of others (and ohhh how I wish more men would take this stance) although I recognise the irony of that statement amongst this gushingly ponderous post. As time goes by I struggle with what to write, and yet, and yet… I still find something, so the hobby continues, even as it veers away from certain areas of my life it embraces new ones.

Even now, as I write this post, I’m trying to find an answer and half wondering if I’ll even post this – because frankly this is getting embarrassingly self-serving – yet it strikes me that I enjoy this habit, this hobby of mine that doesn’t really offer any value to anyone bar me, as it was and as it should be.

So yeah, I’ve wondered if I’m done with blogging, but it appears that I’m not. Not yet.

1 Reply to “Why am I STILL blogging?”