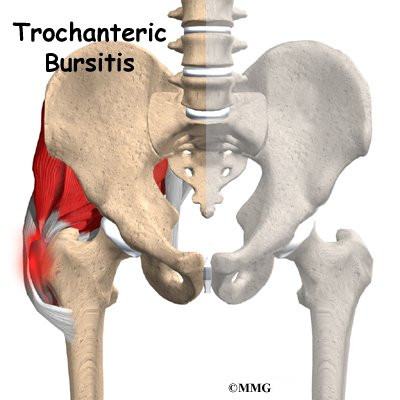 Picture the scene, I’ve stripped down to my underwear, I’m lying on my left side on a bed. A man enters the room, consults some notes, eases down my underwear to expose my right hip. Spots the X that was marked on my skin by the first guy I saw, murmurs “OK…” and then, as he dollops some gel on my exposed hip, tells me it might be a little cold.

He then proceeds to say, “So, basically, this little gun has two metal plates, one at each end of the.. .eh.. barrel, and trapped between them is a ball bearing which is, kind of, repeatedly fired at one of the plates, so, aye, it’s called Shockwave treatment… it’s a little noisy but let me know if it’s too sore or uncomfortable.”

With that, he applies said ‘gun’ and turns it on, triggering a loud fast metallic clacking noise and instant vibrations into my hip joint. I can feel them vibrating down my leg and into my pelvis. It’s not sore, but it isn’t comfortable. It is a very odd sensation.

And not just because I didn’t even know his name.

I’ve had the pain in my hip for a while now, on and off. It’s gotten worse over the past few months but I’m not sure why, perhaps the change of routine at the gym triggered it, or maybe it’s just old age catching up on me. It’s highly likely that it all started back when I was running, my knee still suffers if I spend too much time on my feet, but this new pain in my hip has been a couple of years developing. Regardless, it hurts.

I’m being treated for what has been diagnosed as Trochanteric Bursitis (also referred to as Greater Trochanteric Pain Syndrome (GTPS)). I’d previously been diagnosed with inflammation of my ITB (the ligament that stretches from your hip down the outside of your thigh to your knee), but after an initial period where it seemed to be healed, the pain came back and then wasn’t responding to the treatment. The pain itself isn’t debilitating but is enough to make me wince, and as it comes and goes at random – some weeks I’d be fine, other weeks it’d be there almost permanently – I’d largely learned to live with it and manage my life around it.

I guess part of my thinking was that this was all part of getting older, so what’s a few aches and pains, life could be a lot worse, etc etc.

But I was getting fed up of it, and it was starting to stop me doing things I enjoy, simple things like, you know, walking and stuff like that. So I did some research and booked myself in with a local practice that includes a chiropractor and physio.

The diagnosis was pretty quick, and since then I’ve had three treatment sessions, including the initial consultation. They all follow the same process starting with the chiropractor who checks my lower back and hip then contorts me and literally jumps up to apply weight down onto my twisted torso to ‘open up those hips’. This is followed by a concentrated set of massages around the affected area, some skin scraping, and then it’s off to the shockwave room to have a metal ball bearing repeatedly fired at the tender spot on my hip.

Apparently the thinking is that because it’s a localised pain that wasn’t produce by trauma, the body adapts to it rather than trying to heal it. The skin scraping, which breaks up the tissue and muscle over and around the hip, followed by the shockwave gun working on deeper tissue and ligaments, is all designed to deliberately damage that area of my body so it will start to repair itself.

And it’s working. I’ve definitely got less pain, and even the pain I have isn’t as wince inducing as it was. Admittedly, moving out of my flat, and into a new home with Becca, probably didn’t help what with all the lifting and shifting of my belongings but hey, needs must!

Hopefully the next session, the fourth, will be all I need. Which is good as I’ve not been at the gym hardly at all through January and I really REALLY need to get back on it; my sisters wedding is in August and I need to look good in my skirt…