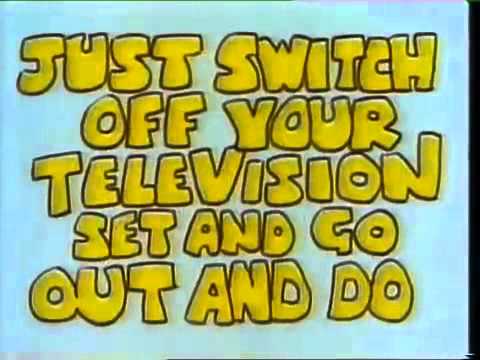 “I saw this advert in a window that said: ‘Television for sale, £1, volume stuck on full.’ I thought, ‘I can’t turn that down.’”

Do you remember the TV series “Why Don’t You?”. It had a really catchy theme tune, the type that stuck in your brain for the rest of the week, I bet some of you can hear it right now? Sing along!

“Why Don’t You, WHHHyyyy don’t you, Why. Don’t. You… just switch off your television set and go outside and do something less boring instead”.

It always struck me as odd though, that a TV show was suggesting I should turn off the TV. I know the late 80s were strange times for many of us, but this did seem a oddly self-defeating. If I turn of the TV set every time your programme starts, what’s the point of the programme. Needless to say I didn’t switch off my television set (and not just because no-one called it a ‘television set’) as there was another hour or so of cartoons to digest before my parents would usher me off the sofa and encourage me to go ‘outside’. I’m presuming that the subliminal messaging of Why Don’t You had somehow filtered through into my parents brains, as they clearly believed ‘outside’ was the very definition of “something less boring instead”.

That was then, when the TV had 4 channels (just), when the remote control was me being told to get up and change the channel, back when putting the TV on was an occasion in itself. Those days the weekends and evenings revolved around what time a TV show was on – god forbid you try and talk to my Mother from 7.30pm on a Monday or Wednesday less you disturb Coronation Street – and live broadcasts were watched by everyone lest you missed out and couldn’t join in the chat the next day.

I never bought into the soap operas my Mother seemed to enjoy so much and pointedly, and with no shortage of teenage huffing theatrics, took the same stance as my Father by finding other things to do to keep myself busy. These things were better than watching those rubbishy TV shows and so my inner snob was finally revealed and given license to roam.

Today I remain the TV snob of formative years and take no pleasure in confirming that my Father has slipped and fallen into the grips of the very soap operas he used to noisily fold his newspapers at, purely because it signals that I too can expect a similar stumble, presuming it’s not already begun. How will I know? And will it be Eastenders or Hollyoaks that become my raison d’être.

I say all of this purely as exposition for a confession. Recently I have fallen into the habit of turning on my television set as soon as I get home, channel surfing to see what is on and, almost without fail, finding nothing of interest or stimulation. Hello inner TV snob! I’m not sure why I do this but I’ve decided to justify it by claiming it’s a subconscious act in which my brain is simply testing my capacity to enjoy the latest antics from Albert Square and, so far at least, I remain thankful I am as bemused by the longevity and success of said soap opera.

With an abundance of streaming services available, and the ability to easily schedule series recordings of my favourite shows, it’s rare that I ever watch ‘live’ TV at all these days, and looking at my Twitter feed I know I’m not alone in this. Where as before it took a royal wedding, or Live Aid, or the FA Cup final, to coax us to huddle in front of the TV, now the latest season of our favourite TV show not only makes us huddle but encourages us to camp out. Binge-watch and chill.

On demand TV is perfect for me as I have a tendency to get bored with TV shows, especially these days with so many other things competing for my attention. Equally the ‘wait a week for the next episode’ approach doesn’t really fit with my ever changing social calendar so being able to pick and choose when I watch a show has gotten me back into watching episodic TV. With great choice comes even less responsibility if my ability to get sucked into watching episode after episode of a show whilst the dishes pile up in the sink; did you know you can pour a fresh bowl of cereal, dump some milk in, and get back to your seat all within the ‘The next episode will start in 15 seconds….’ Netflix count down?

Watching TV is a distraction technique, pure and simple. There are always other things I could be doing than dumbly watching another episode of Homeland, or yet another Netflix stand-up comedy special. This guilt goes back to my childhood, my newspaper rustling father, or the go out and do something less boring instead mentality. I need to make it a choice and engage with what I choose to view. It’s no surprise that the bulk of my TV watching tends to be sport as I can let the rising levels of excitement from the commentators guide me on when to pay attention, meaning I’m typically on my laptop, or doing something else, rather than actively watching.

That is, until I get sucked in, that’s when everything flips on its head and instead of being the background noise that stops my flat feeling quite so empty, the TV becomes the only thing that holds my attention. Chores go undone, dishes unwashed, meals are quick and easy and largely just a stream of snacks by that point.

So what do I choose to watch? Do I have any recommendations? Isn’t that what we do now? Not a day goes past without someone mentioning the best new show ever and how you must watch it. How demanding! And when you do watch it and can only provide a mediocre shrugging response, it was ok but not really my thing, you once again show that you are not of this moment, this cultural event is not yours. And then you repeat this over and over again. Tell me, how many shows have you lightly agreed you’ll try and watch, knowing that you probably won’t…? I’m well into double figures now.

I do tend to miss the zeitgeist of such things, Game of Thrones was a few seasons old when I discovered it. Breaking Bad had been out for 18 months before my addiction kicked in, and I’ve yet to be dragged into that show that Ru Paul hosts.

But some shows do land, and most notable for me is my most frequent, current, recommendation, The Good Place. It may have faltered towards the end of season 2 but remains a short, silly, light-hearted feel good show which, in the midst of the tumultuous shit-show that is writ large in the news each day, seems all the more vibrant and important.

What else? The problematic Seinfeld series Comedians In Cars Getting Coffee is the very definition of a guilty pleasure. Rich white guy in self-indulgent show? Yes. Is he out of touch with the current climate? Yes. (The most recent episode with him and Alec Baldwin discussing #metoo is awful). Yet for those awkward moments that seem to lack any self-awareness there are many wonderful moments of hilarity, insight, and again this is a TV show about nothing (see all previous episodes of Seinfeld) which zips past in 20 mins.

I gave up on The Handmaid’s Tale as it is just too relentlessly bleak (but I’ll likely read the book at some point), The Staircase failed to grab me in the first episode (but a rewatch sucked me in). The Defiant Ones, a documentary series looking at the rise and rise of Dr. Dre and Jimmy Iovine (billionaires who sold Beats Headphones to Apple a couple of years ago) was interesting, and I have a whole blog post trying and largely failing to dissect the brilliant Hannah Gadsby piece, Nanette.

Outside of that, a friend has loaned my the boxset of Sports Night (written by Aaron Sorkin) which will sit nicely beside my ongoing rewatch of The West Wing which I’m pacing alongside The West Wing Weekly podcast, which has made it more a dual format affair and has the side joy of a whole host of other TWWW fans to interact with on social media.

As ever, it’s social media that seems to drive a lot of what I consume on TV these days. Seeing that someone in my tribe is watching a show, or raving about a documentary, or sharing interesting quotes from the latest hit drama, always piques my curiosity way more than all the adverts and billboards. The best advert is word of mouth, says the old adage, and these days social media = word of mouth so where else would I get recommendations from??

The flipside of this is both a list of things to watch that would require me to retire a few years ago, and a distinct sense of FOMO and it’s only getting worse and the real kicker is that a lot of the latest greatest TV shows are of increasingly high quality, well written, well produced, slick, smart and engaging. Why wouldn’t you just stay in and watch something more interesting instead?