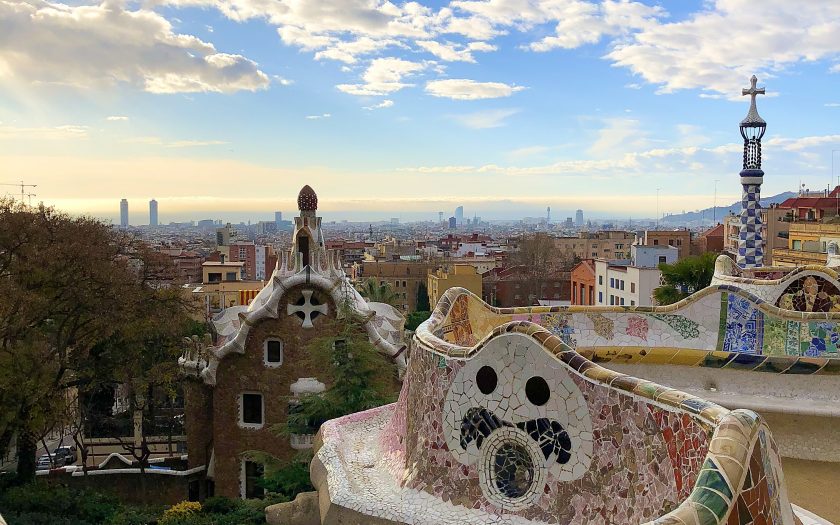 No, not the Ed Sheeran song, if anything my recent trip to this wonderful city evoked the original (and best, and I’ll fight anyone that says different) song performed by two soaring talents…

Gaudi with ALL the filters.. amaze!!

This was my second trip to Barcelona, the first being a lifetime ago as part of an off-site working weekend. I don’t remember much about that last trip as we didn’t really have time to go and be tourists, a quick walk up to the Olympic Stadium was all I had time for, so I was excited to be going again to explore Barcelona anew.

Ostensibly this trip was to go and attend the last two days of Formula One testing, which fall on a Thursday and Friday, so it was simple enough to tag on a weekend of exploration and with such a rich history of art and culture I was possibly a little more excited about that aspect of the trip than the ‘loud cars going fast’ part (possibly, but let’s not split hairs).

My first day was a bit of a rush, getting from the airport to the circuit proved tricky and expensive thanks to IWD protestors managing to close all the major roads out of Barcelona meaning a €60 taxi charge became €110 by the time we pulled up at Circuit de Barcelona-Catalunya, but once there it was great to see the new shiny F1 cars whizzing round the track (and to be clear, I’m happy the protests were happening).

Then it was back to the hotel for a first beer (the circuit doesn’t sell alcohol) in the shadows of a great big half-built cathedral thingy – more on that later – before we headed out for sushi (don’t ask) and ended up in an Irish Bar until the wee small hours which was a lot of fun but didn’t help the next morning, 4 hrs later, when my alarm went off.

The next day was a bit more sedate but the early rise was necessary as we had booked a paddock tour for the morning which meant leaving the hotel at 8.30am… it was a good idea when we booked it. It was, for us F1 geeks, a lot of fun getting to see behind the scenes, the press room, the control center, and even a chance to stand at the top of the podium, before we got a tour round the track and then were let loose(ish) to wander the paddock. As it wasn’t a race day it was pretty relaxed, a Ferrari engineer here, a Red Bull clad person there, but it was cool to see all the kit up close (did you know those massive big tyres only weigh about 5kg, very easy to lift!).

And then it was proper tourist time. I headed out solo on Saturday with a rough route in mind and a few places I wanted to visit on the way. The Picasso museum was my first stop and is well worth a visit. Seeing his progression through his early oil paintings and his journey towards his better known Cubist works was fascinating. From there a wander to marina, a cafe con leche or two, and then I meandered back up into the Gothic Quarter to hit MACBA (Museu d’Art Contemporani de Barcelona).

The gothic quarter is as it sounds, a maze of streets and alleyways you could quite easily get lost in. Cafes suddenly appear on the edge of little town plazas, whilst ornate balconies lean over you, casting their intricate shadows.

MACBA was everything you’d expect from a Museum of Modern art. The building itself, a minimalist stark affair rendered in pristine white, is beautiful and airy and invites you to explore. I was mainly there thanks to the wonders of the internet matching up an image I’d seen some time last year of a piece called ‘Flashers’ by Rosemarie Castoro with the fact that some of her work was being exhibited whilst I was in Barcelona. Aces! It was a fascinating set of performance pieces (recorded), graphic design, photography and sculpture, and I was utterly transfixed.

From the challenging serenity of MACBA I headed back out to meet up with my friends in another Irish bar to watch Scotland play Ireland at rugby… least said about that game the better… and then we all met up again later for dinner and drinks at a very hipster restaurant called Zed. The food was very good, although it did seem to depend on what you ordered as some of my friends didn’t enjoy it as much as I did.

Sunday was Gaudi day, a man it is hard to escape in Barcelona, and it was also Barcelona Marathon Day so the place was jumping. Still, I had my tickets for Park Guell and Sagrada Familia booked and another early alarm set so I had time to walk up to Park Guell for my 8.30am entrance time. I’m glad I got there early as it was quiet enough to enjoy without hordes of tourists and the sun was still low as Barcelona lay spread out below me. I took some time to sit and marvel at the intricate mosiac work, the organic curves of the lookout structure and just enjoyed being outside in the early morning sunshine with Barcelona starting to shimmer in the morning sunshine.

My entrance ticket to Sagrada Familia was booked for 12noon so I had plenty of time to wander back, letting my feet take me down streets and side streets, stopping for lunch and churros when I got hungry. The influence of Antoni Gaudi was obvious, with curving balconies and stained glasses edifices all over the place, and that was all before I got to Casa Batlló, another famous building covered in a myriad array of tiles and colours, wrapping the rippling facade and shimmering in the sunshine. Beautiful.

And then it was on to Sagrada Familia, that massive unfinished cathedral that is still being worked on many years after Gaudi’s death.

Built using a clear set of principles, which are still followed to this day, it is an epic achievement of stunning design. The outside is decorated in various biblical scenes and as you enter through the 10foot high (carved and painted) ivy clad doors your eyes immediately follow the tree like pillars up and up to the gloriously vaulted ceiling space.

When I arrived at the cathedral a few clouds had started rolling in, so I was glad to get inside before the rain started. I wandered in and started to look around, admiring the massive stained glass windows, the gently angled and tapered columns, the entire organic feel of the place and then it happened. I turned round to look back at one set of windows just as the sun came back out and all of a sudden the stained glass sprung into life, bathing the entire vestibule in a rainbow of vibrant, breathtaking, colour.

Well I wasn’t expecting it to be quite this stunningly beautiful. Almost moved to tears, it’s breathtaking. Note the hashtag #nofilter

It’s hard to put into words my emotions. I’m not particularly religious but the word ‘reverence’ springs to mind. The effort and toil that had gone into this building, into the careful representations, the swoops and spirals set in stone, and those stunning windows was brought to life and I was utterly spell-bound and overcome with awe. I sat down on a nearby seat and stayed there for some time, on the edge of tears. It was beautiful, in the very true sense of the word.

Whilst that moment will be the first one I tell people about in years to come, I loved every minute of my time in Barcelona (OK, every minute AFTER that fuckin taxi ride). It is a beautiful city to spend time in, whether wandering the parks, marvelling at the luxury yachts, or exploring those timeless lanes and alleyways. Despite all the ‘be careful of pick pockets’ warnings I’d been given I never once felt threatened and everywhere I went, with my paltry attempts at Spanish all I had to offer, I was met with smiles and warmth.

I think it’s only fair to hand the last word back to Freddie and Montserrat: