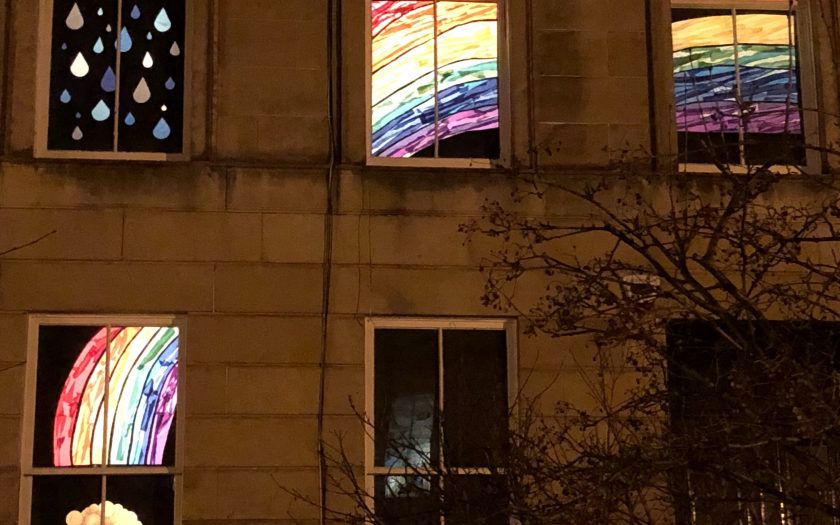 “It’s 106 miles to Chicago, we have a full tank of gas, half a packet of cigarettes, it’s dark and we’re wearing sunglasses… HIT IT!”

Last weekend saw me driving through to Edinburgh as the last remnants of daylight faded to black, I had already taken my sunglasses off, and I don’t smoke, but the sentiment was the same; (mini) road trip!

The previous evening found me and several hundred other people, wandering the streets of Strathbungo, a suburb in the southside of Glasgow, enjoying the labours of many a budding window artist as we partook of the annual Strathbungo Winter Wanderland. With local roads closed to traffic, we took to the streets to peer over railings and hedgerows to see what was on offer. Most of the streets are three story tenements so there was a LOT of window real estate on offer.

The idea of decorating your windows is simple enough, yet the possibilities are endless and it was fascinating to see how the residents had tackled their part of the project. Decorate one window, decorate all of your windows or in some cases, get together with your neighbours in the rest of the tenement and decorate them all in a giant montage. One buliding had a giant lobster spread across several windows, another a homage to Jimi Hendrix in one window and in the next, with a small speaker perched on the window ledge, was someone playing classic Hendrix tracks live.

Smoke machines, projectors abound, balloons were deployed to excellent effect in some, and yet for me it was the simpler designs that often won out. Definitely one to watch for next year.

It was with these images still fresh in my mind that I drove through to Edinburgh. I was heading for the Zoo and the Chinese Lantern display to see what all the fuss was about; it’s been scattered through my social media feeds for the past month and I was genuinely excited to see it up close.

On arrival one thing was very clear, I had not fully appreciated the scale of what was on offer. It was a bit odd being in the zoo at night and I completely lost my bearings, but we dutifully followed the sign posts and at every turn were greeted with a variety of animals, some animated, all light up bright against the night sky. All the way round to the central Chinese pavilion, where we were entertained by a display of acrobatics by a Chinese troop. Marvellous!

What a fab way to spend a Sunday evening

I didn’t plan my weekend to be quite so themed but such are the happy coincidences of life. I’m also not quite sure why such simple things are such an attraction but both venues brought the same level of delight to my heart, and a smile to my face, so I guess there’s something to be said for the humble light bulb and it’s modern cousin the LED.

And I wasn’t alone. As I wandered the streets of Strathbungo and zipped around the Zoo, it was the same basic human reaction that was on display. It’s the same you get at firework displays which illicit the same gentle smiles as the night sky explodes into life.

Is it a primitive preference of light over dark that draws us to such things? Do the lights offer a sense of primitive safety over the danger our long dead ancestors must have felt before they discovered fire? is it the simple contrast of colours against blackness that is pleasing delightful to the eye? Or, perhaps, in these days of doom and gloom, of Brexit and Trump and Syrian Wars, these glowing colours offer us a few small moments of wonder and marvel, enough to temporarily soothe our battered spirits and give us pause before the dawn comes again.