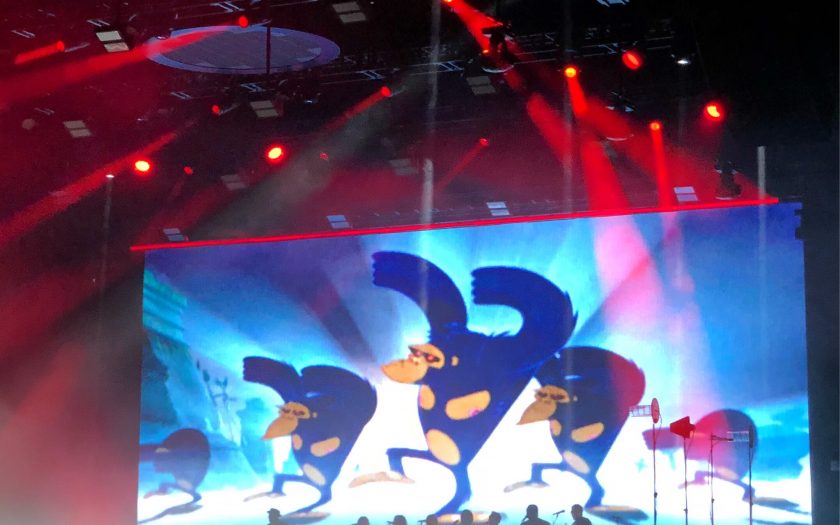 Now and then I buy a ticket for a gig in the hope that it’s at least ok, and whilst I’ve been a fan of Gorillaz since their first album they are the type of band that blip on and off my musical radar, so my expectations weren’t too high as we waited for them to come on stage.

Now I should admit that part of my lowered expectation was down to me looking at a setlist and seeing a lot of newer tracks but very few older ones, not to mention some noticeable hits not even mentioned. Still, I know Damon Albarn has a great reputation live, and I was eager to see how the ensemble approach played out on stage.

From the opening calls of M1 A1 to the close of Clint Eastwood/Don’t Get Lost in Heaven/Demon Days, and the myriad of rotating vocalists (some on stage, some on screen) I realised I was lost in each moment, dancing like an idiot (although the pre-gig gin cocktails probably contributed to that). What a great gig, well paced, and the crowd were literally jumping. Seeing Mr. Albarn whipping the crowd into a throbbing frenzy, his smiling face lit large on screens, was an utter joy to be part of.

It’s the thing that separates gigs, the difference of being part of an experience, or just ‘watching a band’. The most vivid example I ever had was at my first Glastonbury. U2 on the Friday night were ‘look at us we are rock stars’, Elbow on the Saturday evening were ‘hey guys aren’t we all having fun’.

Gorillaz romped through 20+ tracks, barely drawing breath between each. Some songs were tweaked for the live performances but each one landed well. Even standing at the very back of the massive space that is the Hydro we felt part of things. Seeing an artist making that connection, interacting with the crowd and making it a joint experience makes all the difference, and it doesn’t matter where you are standing.

The atmosphere was buzzing from front to back, each track met with hollers of recognition (from me too), and of course we got to watch 2-D, Murdoc, Noodle, and Russell do their thing too. I don’t think I’d realised just how much of the Gorillaz sound and visuals had seeped into my brain but it all came flooding back, after all … it’s all in your head.

For Our White Friends Desiring to Be Allies
2 June 2020
Op-Ed: Kareem Abdul-Jabbar: Don’t understand the protests? What you’re seeing is people pushed to the edge
2 June 2020
The American Nightmare
2 June 2020
This Small Change in Your Language Can Help Downplay Negativity
31 May 2020
Historian Ibram X. Kendi On 'How To Be An Antiracist'
28 May 2020
30 Movies That Are Unlike Anything You’ve Seen Before
28 May 2020