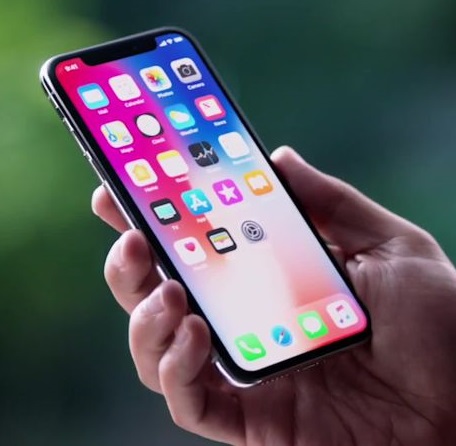 Yes. I got THE new iPhone, not an 8 or 8 Plus, but the new shiniest of shiny one. Did you expect anything else?

Like millions of others, I hit the Apple App Store at 8.01 on the 27th October and reserved mine, with a provisional pickup date of the 18th November. So imagine my surprise when an email landed in my inbox on the 2nd of November saying my new iPhone was available for pickup. Surely a little snafu, I thought, but I clicked ‘Select a Date and Time’ presuming it would just confirm the 18th November date. But wait, what’s this… 10am on November the 3rd is available, why that’s tomorrow… that can’t be… click click CLICK! YASSSS!!!

And so, as I had the week off I found myself backing up my ‘old’ iPhone to my laptop and heading to the Apple Store the very next day to get my new shiniest of shiny iPhones!

I am on the upgrade programme and after experience I had last year I was prepared for a wait (let’s just say that the finance company wasn’t really geared up for the overwhelming volume of people applying). So, as well as my laptop I had a book, bought a coffee and joined the queue. A few minutes later a very nice man with an Apple t-shirt wandered down to speak to me and confirmed that I was standing in the wrong queue – there were still people queueing just in case there were any left to buy that day – and I was whisked inside and a few moments later was introduced to Abi who was going to get me my new shiny iPhone X. In other words, Abi had just become my new bestest favouritest friend in the world ever.

Abi was very pleased I’d backed up my old iPhone that morning and, after confirming some details, clicking a few buttons marked Accept, and signing my name, one of her colleagues walked past and casually placed a new shiny iPhone X in front of me.

With my old iPhone wiped and handed over, I was invited to grab a seat to set up my new iPhone. I took my laptop out, and started to restore from the previous backup*. As I sorted that out I finished my coffee which was still at a very nice (hot) drinkable temperature. Yup, from walking through the door to setting up the new iPhone took all of 10 minutes, and that included the handset that Abi was using dying on her part way through the process.

That was a few days ago now but my very first impressions were, naturally, concerning that screen. I quite genuinely thought that there was a sticker on the front of the screen but no, it really does look unnaturally NOT digital… it’s hard to explain but the OLED screen really does make the experience look more natural and ‘real’. It is gorgeous.

Day to day use is, hardly surprising, pretty similar to using any device running iOS, however there are notable differences largely around Face ID and the lack of home button.

All told it took me maybe a day to ‘switch’ over the muscle memory on how to unlock my phone. FaceID is remarkably intuitive and works well. For the first few days I found myself watching for the unlock animation to get a visual confirmation that my phone was unlocked but pretty soon I was just lifting the phone (raise to wake) and swiping up, it feels faster than jabbing the Home button and waiting for TouchID. It has ‘failed’ twice, once where the combination of direct sun on my face and very dark sunglasses foiled it (it worked just fine every other time that day though) and once where I had the phone upside down (hey, it’s one big flat sheet of glass).

Suffice to say that I’ve already forgotten to think about FaceID which speaks volumes of how dependable it has been, which is pretty remarkable in and of itself.

A nice side effect of raise to wake and FaceID is for notifications. Lift your phone and look at it and as it unlocks the preview info for each notification slides into view. That way I can quickly decide where to do anything with them or not. This was already there but not as easily viewed back in the TouchID days. And finally, with 1Password hooking into FaceID I can now complete forms, including complex passwords, just by looking at my screen. It really is 2017, at last!

Two main muscle memory challenges await you. One is to stop looking for the Home button, the other is finding the Control Center.

With no Home button you simply swiping up to go back to my home screen and swiping right in app to go back an app in the ‘stack’. There is a thin bar on-screen as a visual cue but after a couple of hours it felt natural. I think I have caught myself looking to push the Home button once and that was on day one.

As I said, coupled with TouchID, this fundamental change is so fluid that it has already been relegated to the unconscious part of my brain. It’s just how I use my iPhone now.

Battery life seems better (than my iPhone 7) with a full day and then some; I took my phone off the (wireless) charger at 8.30am yesterday and after a lot of photos, and a lazy social media afternoon it still had about 36% left at 11pm. Obviously the camera is a step up as I now have access to Portrait mode which produces some wonderful images, but nothing that you iPhone Plus users aren’t used to. That said, I can’t wait to see how it handles taking pics at the gig I’m at this evening (Dinosaur Pile-up at King Tuts).

Wireless charging is a little underwhelming but again that’s a good sign. I bought a Samsung charger in preparation for getting the phone, popped the iPhoneX on it and it … works. That’s about all I have to say about that.

There are some noticeable differences in the form factor. Size wise it feels a little heavier than my iPhone 7 but nothing dramatic, and it’s not physical all that much bigger either, the advantage of the full-screen display is the most striking benefit. I opted for the white version and it is a gorgeous piece of hardware, and feels like a real step up in quality**.

As many others have noted, and will notice, the only thing I don’t like is the keyboard. Or rather, the space under the keyboard. I’m not quite sure why it’s there and I hope future releases of iOS ‘fix’ it.

This is the first iPhone that has felt like a real upgrade for quite a while. The form factor of the previous few iterations didn’t change dramatically, especially for those of us who use a case and don’t see the subtle differences in materials and bevels. The new screen is the star here though, or is it FaceID? Technically it should be the latter given the myriad of advance technology that powers it but in true Apple style ‘it just works’ and you soon forget about it.

I am still getting that tiny little moment of joy every time FaceID kicks in though, it’s so simple and really does feel like a step forward. As many others have noted, I too find my year old iPad Pro now feels pretty cumbersome… I had to manually enter a password the other day, what the..!!

Yes, I’m a bit of an Apple fanboy but putting that aside this is a stellar bit of kit. Highly advanced, beautifully crafted, it is a big step forward, possibly one of the biggest Apple has made in recent years. It’s the kind of thing people expect Apple to do, although it’s worth remembering that a lot of the features that are coming together to make this new phone a reality have been developed over the past few years. This is NOT a reaction to other handsets or companies, this is Apple doing their own thing, in their own time, with their own reasoning and compromises.

Ohhh and I should point out the one thing that truly hasn’t been an issue.

* Top tip – if your current iPhone is running a BETA release of iOS, which my iPhone 7 was, you can’t restore from a backup as the new phone will be on an older release of iOS. Thankfully I also had an iCloud backup so got all the right apps and most of the settings back, just took an age to download them all again.

** Back in the day I worked for a software company – Dr. Solomons – and you could buy a CD of their anti-virus software from stores. The amount of time taken to choose the cardboard box that the CD and accompanying manual came in was largely focused on if the box suggested high quality. Heavier cardboard (and heavier paper in the manual) passed all the consumer tests. We associate heft with quality, even if only subliminally